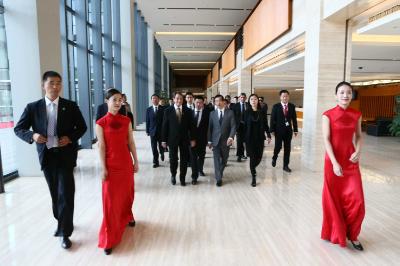 The relations between Nicosia and Beijing are entering a new phase, said the Government Spokesman Nikos Christodoulides.

In his remarks to reporters, in Shanghai, where he is accompanying the President of the Republic on his visit there, Christodoulides said that “considering the discussions of the President of the Republic, but also the meetings of the Ministers that accompanied him with officials of the Chinese Government and the Communist Party, we can argue that the relations of Nicosia with Beijing are entering a new phase”.

There is, he noted, the obvious political will by both sides to strengthen and upgrade those relations further. And, in the immediate near future, a lot must be done, especially at a technocratic but also at a political level, so that there is an implementation of all that have been agreed at a political level.”

Asked whether there are results with regard to the opening of prospects in the economic sector, the Spokesman said that “you realize from both presentations by the President of the Republic before the business fora that were organized, but also from the discussions with the officials of the country, as well as from the meetings of the Minister of Transport, that it is obvious that there is interest for investments in Cyprus”.

And all these, he added, – in combination with the presence of the President at the Conference on the Silk Road and the fulfillment of this fundamental Policy of the President of China – presuppose the strengthening of the economic relations of China with the countries that participate in this Policy, something that is expected to bring specific results in the immediate near future.

“We must also, on our side, in the immediate near future, proceed with specific actions, with contacts with the Chinese side, so that all that have been agreed to move forward in practice”, he concluded.