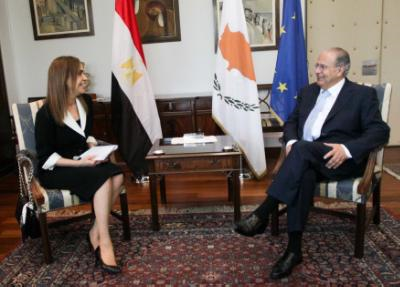 Cyprus and Egypt enjoy one of the best periods in their bilateral relations, says outgoing Egyptian Ambassador Heba Salah Eldin El Marassi, who sees cooperation moving forward in all fields.

El Marassi was decorated on Tuesday morning with the Commander of the Order of the Merit of the Republic of Cyprus, during a brief ceremony at the Foreign Ministry, with Minister Ioannis Kasoulides expressing deep appreciation to a “true friend of Cyprus” while bidding farewell to the Ambassador.

While presenting the decoration, on behalf of the President of the Republic of Cyprus Nicos Anastasiades, Minister Kasoulides said the Ambassador worked tirelessly during her tenure for the enhancement of relations between Cyprus and Egypt.

“Our two countries enjoy an unprecedented level of cooperation in many fields and have achieved remarkable progress in strengthening our bilateral relations and the cooperation on regional and international issues of common concern,” Kasoulides said.

Addressing the Ambassador, he noted that her efforts “have been instrumental in promoting the Cypriot-Egyptian friendship”, while her active personal involvement was “especially crucial” as regards the establishment of the trilateral cooperation with Greece.

Cooperation between Cyprus, Egypt and Greece opens new channels of cooperation in different fields and promotes peace, stability and prosperity in the Eastern Mediterranean, the Minister concluded.

In statements after the ceremony, the Ambassador said she felt very honored and proud for receiving this decoration, but also for “having worked in such a wonderful country like Cyprus”.

She noted in particular the support she enjoyed from President Anastasiades, the Ministers and the people of Cyprus, since the moment she arrived in the country, and noted the successful results of the work done.

El Marassi observed that the present period is “really one of the best periods of our relations”, and said that cooperation was moving forward in all fields, economic and political alike.

The Ambassador is expected to depart from the country at the end of this month.