NexT International Film Festival begins in Bucharest on Wednesday 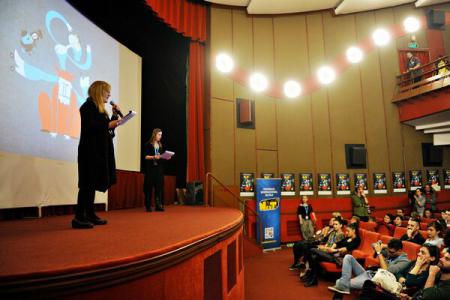 According to an organisers’ release remitted to AGERPRES, the official opening of the event will take place on Wednesday, starting 19,30 hours, at Studio Cinema of Bucharest.

In the opening gala, Ada Solomon, the founder of NexT Cultural Society, and Yvonne Irimescu, the coordinator of the festival, will present the most important moments of the edition. The opening will be followed by the short films in the new section “Behind the Scenes.” From absurd comedy, to desktop documentary, the films inquire on what happens behind the camera. Two of them are Romanian productions: “Arta” (Art), directed by Adrian Sitaru, and “Fata care mananca pizza” (The Girl Who Eats Pizza), by Ion Indolean, Bogdan Coste and Adrian Carlugea.

On the same evening, starting 20,30, in Control Club, the six provocative films of the LGBT section will bring to discussion the prejudices about sexuality and sexual minorities. More…