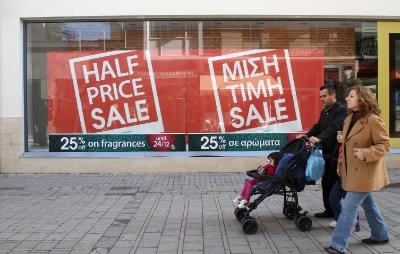 The Cabinet decided on Wednesday that Labour Minister Zeta Emilianidou would issue a decree within the day allowing shops to remain open on Sundays until the end of November.

The move comes after Attorney General Costas Clerides had issued an opinion that a law passed by Parliament on May 7 restricting opening times for general shops on Sundays is uncostitutional and will be referred by President Nicos Anastasiades to the Supreme Court.

In statements to the press after the Cabinet`s meeting, Emilianidou referred to a new SME support scheme which will subsidise by 60% of the salary of a newly hired employee so that shops can remain open on Sundays if they wish to do so. SMEs will qualify for the scheme if they employ upt to 4 persons.

Replying to a question, she said that if the Supreme Court rules that the law passed by Parliament is in accordance with the Constitution, then the decree will cease to be in force.

On his part Deputy Government Spokesman Victoras Papadopoulos said the Attorney General`s opinion gave President Anastasiades no other option but to proceed with the law`s referral to the Supreme Court.

The President “fully respects the parties and the parliament decisions but above all he has a duty to respect the Constitution”, he pointed out.

With the exception of ruling party DISY, which considers the Cabinet decision a natural outcome following the Attorney General`s opinion, other parliamentary parties expressed disappointment.

Left wing AKEL spoke of a conscious choice to be at odds with parliament, employees and thousands of SMEs and called on President Anastasiades to think things through and choose the path of consensus and honourable compromise.

The Democratic Party DIKO called on the government to start talks on the matter in order to normalise the situation.

Social Democratic EDEK said the government is ignoring the will of the House majority and it should realise that such serious matters are not resolved by decrees but rather through dialogue and respect of majority decisions.

Small retail businesses association (POVEK) called on Emilianidou not to issue a decree, warning that it would file a recourse against it in Court in an effort to protect its members. The Association of Convenience Shops (SYKADE) expressed disappointment and spoke of the need for healthy competition between big and small businesses.

On the other hand Nicosia Chamber of Commerce and Industry issued a press release welcoming the government decision and called on the parties and Parliament to listen to consumers` concerns and review decisions which would be catastrophic for the economy.

Pancyprian Retail Trade Association said the decree would give time for all involved to seriously consider what to do in order to boost the economy and to safeguard competitiveness.
CNA/EPH/MM/2015
ENDS, CYPRUS NEWS AGENCY