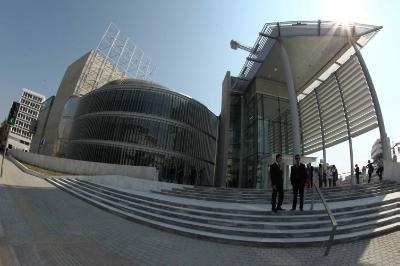 Cyprus Theatre Organization (THOC) and the National Theatre of Greece signed on Thursday a cooperation protocol to enhance their cooperation, through a return of the Cyprus theatre to Epidaurus Festival, exchange of actors and other joint events to highlight the universality of the theatre.

The protocol also aims to unite the theatres of Cyprus and Greece in a cooperation which has been described as a union in the “footsteps of Saint Paul”.

Stressing the importance of the protocol, Chairman of the Board of THOC Yiannis Toumazis said this was the beginning of a new, dynamic and creative collaboration between the two state theatres. Toumazis said that the artistic program of cooperation with the National Theatre of Greece should be seen as part of the effort of the organization to expand its activities beyond Cyprus and particularly in the Mediterranean and in Europe.

He added that Cyprus, in spite of all the problems it is facing, is the EU gateway to southeast Mediterranean, it has an important role to play and provides the security that could boost cooperation with the countries of the area.

“So why not try to become a pioneer hatchery of theater, a cultural center, creating an extrovert, innovative model in the EU”, Toumazis wondered, adding that cultural diplomacy can work effectively where many other means have failed to strike a balance between different cultures and unite people.

President of THOC also said that cooperation between the two theaters is intended to extend to a number of sectors and include a wide range of activities, such as the exchange of theatrical performances, co-productions, mobility of actors and technicians, educational programs, seminars and teaching.

“The cooperation between the two theaters comes at the best time, to bring a breath of fresh air in cultural and artistic events in Cyprus and Greece,” he added.

The President of the Council of the National Theatre of Greece Yiorgos Stefanakis noted that “we are latecomers in this cooperation.”

Referring to his bonds with Cyprus, he said that he experienced closely the Turkish invasion in 1974 and he has also experienced Cyprus through the poems of George Seferis.

“We have the ambition to give impetus to this partnership which brings me again close to Cyprus,” he said.

The Artistic Director of the National Theatre of Greece Sotiris Chatzakis said that the cooperation protocol was initiated by the fact that the two countries are struggling to deal with difficult situations both economically and morally.

He noted that culture is not a derivative of growth, is a constituent element of it and politicians need to understand that.

“You cannot ask for growth that doesn`t  include culture, because then business is` just business`. That means that we should find opportunities and partnerships to involve THOC and the National Theatre of Greece institutionally rather than occasionally “he added.

Chatzakis said that through the cooperation protocol, Greece Cyprus and Israel as well could take on stage and present scenes from the letters of St. Paul.
CNA/AAG/TNE/MM/2015
ENDS, CYPRUS NEWS AGENCY