Most Romanians in favor of union with Moldova before 2018 (poll) 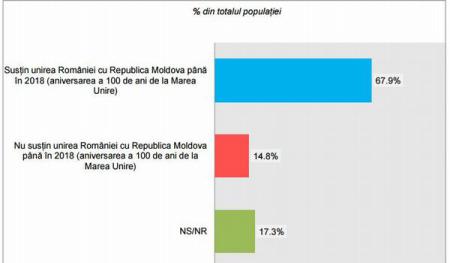 The majority of Romanians, namely 67.9pct of respondents of an Inscop poll, is in favor of the country’s unification with Moldova before 2018, while 14.8pct of respondents do not fully support it. The year 2018 marks the centennial of the Great Union, meaning the unification of Transylvania, Basarabia and Bucovina with the Old Kingdom (Wallachia and Moldova, in union since 1859) in 1918.

“The percentage of those in favor is very high and confirms data collected and processed in the past under the Inscop — The truth about Romania poll. Certainly, the idea of the 100th anniversary of the Great Union has a marked unionist touch, but the year 2018 offers the respondents a very close, ‘tangible’ time limit”, Darie Cristea, Inscop’s managing director stated in a press release sent to AGERPRES on Friday.

A percentage of 17.3 respondents did not know or did not answer the question.

According to the same poll, 52.6pct of Romanians state they approve of Dorin Chirtoaca’s winning the Chisinau mayoral elections, while 6.9pct do not approve, while 40.5pct did not know or did not answer.

“The number of non-responses is very high; this points to the main problem in the way Romanians relate to Moldova — their precarious knowledge regarding events taking place beyond the Prut River. (…) The phenomenon should not be too closely associated with the personality of Dorin Chirtoaca — a lesser known figure in Romania — but with the general attitude of support for Moldova’s European journey”, Darie Cristea added. More…