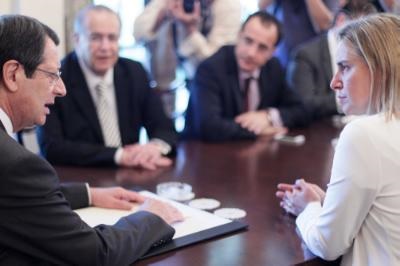 EU High Representative for Foreign Affairs and Security Policy, Federica Mogherini has emphasised the significance of Cyprus` role in the region.

In remarks after being received on Friday by President Nicos Anastasiades, Mogherini who is on a one-day visit to the island said that “we had a very good long meeting with the President, passing all our European support from the European Union to the talks in view of the settlement of the Cyprus issue and recognizing his leadership and his commitment in this respect”.

She said the two discussed “the regional dimension of the Middle East peace process in view also of the visit that (Israeli) Prime Minister Netanyahu will pay here next week”.

She said “the role that Cyprus is playing in this regard is crucial for the EU and obviously we shared views also on the wider framework in the region after the Iranian deal and relations with Egypt and with the rest of the wider Middle East”.

Cyprus, added Mogherini, “is always playing an extremely positive and useful role especially in this part (of the region), when it comes to our foreign policy in this part of the region”, adding that she has confirmed this “from these talks we had and we decided that obviously we will continue to get very much in contact and in coordination when it comes to our work in the Middle East”.

The EU High Representative will also pay a visit to the President of the House of Representatives. She will also meet with the Parliamentary Committees on Foreign and European Affairs and Defence before giving a press conference later Friday at the Foreign Ministry.
CNA/AGK/EC/GCH 2015
ENDS, CYPRUS NEWS AGENCY