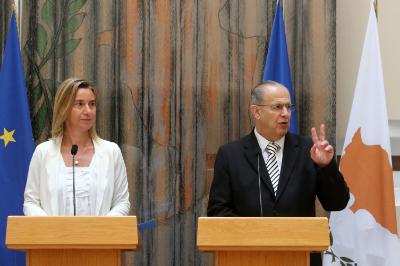 European Union foreign policy chief Federica Mogherini called on everybody, on Friday, to think of the cost of not reaching a solution to the Cyprus issue, speaking to the press after a meeting with the Cypriot Minister of Foreign Affairs Ioannis Kasoulides, in Nicosia.

Mogherini’s visit to Cyprus was held as part of her outreach to all the EU member states.

The EU High Representative for Foreign Affairs and Security Policy and Vice-President of the European Commission and the Cypriot Foreign Minister had a tete-a-tete meeting, at the Ministry of Foreign Affairs, followed by official talks, statements to the Press and a working lunch.

Issues on the agenda included, inter alia, the developments on the Cyprus problem, the Southern Neighbourhood, EU-Russia relations and Energy Diplomacy. Developments in Syria, Egypt and Libya were also discussed. They also sought ways in which Cyprus could contribute to the EU efforts and involvement in the region.

On the Cyprus problem, the High Representative of the EU expressed the Commission’s full support to the efforts for reaching a solution through the UN-lead negotiation process.

“I think that, yes, the EU is strong, it is much stronger than we, ourselves, recognize sometimes” she said, “but again, the real costs would be if this process failed. I think that these would be the real cost that no one could bear”.

The EU High Representative said she was confident that the leaders of the two communities “can bring results, especially for the younger generations”, noting that “what is at stake here is the future of the generations that were growing up in these last 41 years”.

She said that a solution would be also an “investment for the European Union as such” and a key contribution to the stability and the security of this region.

“So I really hope that this process can lead to a result. I do not say that it is now or never, but I do say that it is either now or very difficult in the future. I will personally do all I can to support this process in order for it to have a positive outcome,” said Mogherini.

The EU foreign policy chief stressed that her visit falls within the efforts to shape a common, strong and consistent foreign and security policy of the European Union and thanked the Cypriot Minister “for the always strong, wise and truly European approach that Cyprus brings to the table”.

As she said, she visited Cyprus “to meet and discuss the priorities of your country when it comes to the foreign and security European policy. And here obviously, the number one priority is this region, this part of the world, which is the most conflictual and it is also the most relevant for the EU’s external action”.

On the Iranian nuclear programme agreement, the High Representative noted that it was obviously a matter of security for Cyprus and the EU, whereas on the Syrian crisis she pointed out that it is lasting too long, with security and humanitarian consequences, with huge flow of refugees that create “other issues on our European table”.

The Palestinian issue “is another area where our cooperation is hopefully bringing some fruits and results,” she added, thanking Cyprus for its contribution to reviving the EU role in opening new perspective for the peace process.

Welcoming the High Representative, the Cypriot Minister said that they had an in depth discussion on a whole range of issues that affect the foreign policy agenda of both Cyprus and the EU.

“Cyprus is a strong advocate for a robust and coherent EU common foreign and security policy. We are also committed to the further strengthening of the European External Action Service,” he said.

Kasoulides added that they exchanged views on developments in the EU’s Southern Neighbourhood. “Cyprus is the EU’s border in this volatile area and we shared ideas on how Cyprus and the EU can contribute to the promotion of regional stability and security,” he noted.

The Cypriot Minister congratulated the High Representative for the EU’s for her own personal role in reaching the historic agreement on Iran’s nuclear programme and said that “we expect that Iran will assume a constructive and responsible regional role in order to allay the concerns of other friendly nations in our neighbourhood”.

He said that they also discussed the EU-Russia relations as well as the situation in Ukraine. “I underlined that engagement is better than confrontation and that the EU should develop a strategic vision of its relations with Russia,” he noted.