Messages from the play were very strong, President says 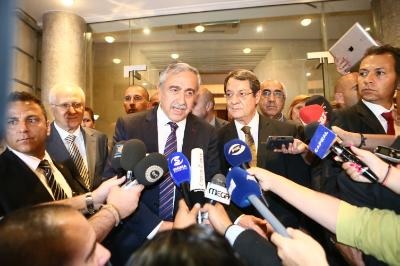 The messages the play we just watched sends are very strong, Cyprus President Nicos Anastasiades said, in statements with Turkish Cypriot leader Mustafa Akinci, with whom he watched a theatrical play at Rialto Theater in Limassol.

The play “Cyprus: Saddened in Greek, wounded in Turkish” was written by Turkish Cypriot Faize Ozdemirciler and performed by the Turkish Cypriot Nicosia Municipal Theatre, adapted and directed by Turkish Cypriot actor Yasar Ersoy. It refers to the tragic events of the island’s past and the present, focusing on the future.

In statements to the media, the President noted that both him and Akinci have to work hard for peace, adding that “our people demand peace.” He also announced that he will talk with Education Minister about the performance of the play at schools, noting that it gives a powerful message.

Asked if he is ready to visit the occupied areas of Cyprus to watch a theatrical play performed there, Anastasiades said that he is planning to do so.

Mustafa Akinci said that “we must not lose hope” and “we must work hard to understand each other and create a better future for all of us.”

He added that the play they watched with President Anastasiades sent a powerful message, noting that both Greek Cypriots and Turkish Cypriots made mistakes in the past.

“We have to learn from the past, from our mistakes and build a better future for the younger generations,” he added.

Asked if he plans to visit Limassol, his birthplace, again, Akinci replied affirmatively, and invited Anastasiades to attend a similar event in the occupied areas.

Later on, Anastasiades and Akinci attended a dinner at a restaurant, hosted by the Mayor of Limassol Andreas Christou.

President Anastasiades and the Turkish Cypriot leader are engaged in UN-backed talks which resumed last month, with the aim to reunite the island-divided since the 1974 Turkish invasion-under a federal roof.