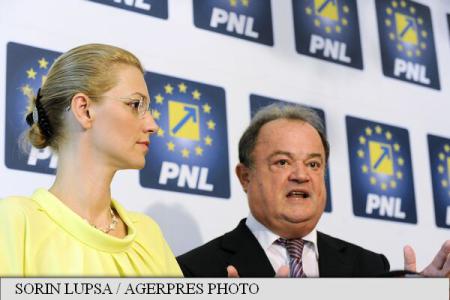 Co-chair of the opposition National Liberal Party (PNL) Vasile Blaga on Monday said the budget amendment envisaged by Prime Minister Ponta has no vision, does not steer resources to important public policies; it only covers ”politicking and populist needs” while betraying “desperation on the part of [former Social Democratic Party (PSD) national leader] Victor Ponta to control PSD by earmarking huge funds for the party’s barons.”

“This is the first time after 1990 when a budget amendment is performed at the headquarters of a party instead of at the Government House, with the national budget clearly turning into the PSD’s piggy bank. His revision lacks vision; it does not steer resources to important public policies; it only covers politicking and populist needs. They have not publicly disclosed whether or not they have the approval of the Fiscal Council. The revision reflects Ponta’s desperation to control PSD by earmarking huge funds to the party’s barons,” Blaga said at the end of a meeting of the PNL’s Unification Board.

He also criticised what he said was just 3.8 billion lei allocated for investment in the first six months from the national budget, “which is by 20 per cent less than in 2014.”

According to Blaga, even if the collection rates have improved, not a penny should be cut from healthcare, where the needs exceeds by far the available budget, whereas keeping the funds with the Health Ministry would have allowed better funding of the programmes under the healthcare system. More…