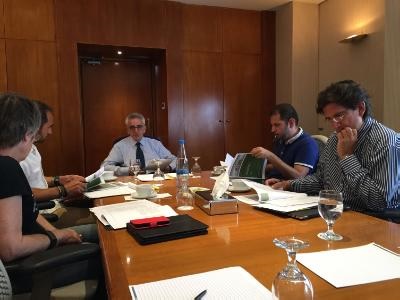 Michael Leigh, consultant and senior advisor to The German Marshall Fund of the US, will present these days the results of two policy papers of the Organisation on Cyprus’ natural gas. On Monday, Leigh briefs the Minister of Energy, Commerce, Industry, and Tourism Yiorgos Lakkotrypis, on Tuesday he will meet with the President Nicos Anastasiades and on Wednesday with Foreign Minister Ioannis Kasoulides. During his stay in Cyprus, Leigh will meet the Turkish Cypriot leader Mustafa Akinci and representatives of companies that are active and in the field of energy in Cyprus.

At the meetings, Leigh will brief his interlocutors on the results of the papers conducted for The German Marshall Fund by Nikos Tsafos and Anastasios Giamouridis and the recommendations proposed in those papers on the exploitation of natural gas reserves, the cooperation with Israel and the possible development of a pipeline to Egypt. Furthermore, Leigh will discuss the current phase of the Cyprus issue and the prospects offered in the field of energy from a possible solution to the problem.

In a briefing with journalists on Monday, Leigh analysed the two papers and its conclusions and discussed the prospects of exploiting and exporting of the natural gas reserves, as well as the prospects for development of infrastructure in Cyprus.

Leigh referred to the paper titled “Financing gas projects in the Eastern Mediterranean” by Anastasios Giamouridis and Nikos Tsafos, who provide a detailed assessment of the factors that influence investment in gas and related infrastructure projects worldwide with a focus on the Eastern Mediterranean. In addition, they examine the relative merits of project finance and corporate finance for the development of offshore gas resources and for bringing the gas to market.

For Cyprus, according to the paper, its most immediate priorities will be to develop the Aphrodite field and to continue exploration, in light of some initially disappointing results and lower oil prices. Given the country’s financial position, project finance might make sense as it allows the state to participate.

The main uncertainties in Cyprus center on the ultimate size of the resource. The preferred solution at the moment seems to be an export pipeline to Egypt, if this proves commercially feasible. However, alternative gas monetization options, such as LNG (Liquefied Natural Gas) could again be considered if additional gas quantities are discovered.

Referring to the second papers of the German Marshall Fund of Nikos Tsafos, titled “Egypt: A market for natural gas from Cyprus and Israel”, he said that it analyses the opportunities and risks associated with the possible export of natural gas from Israel and Cyprus to Egypt. The papar`s analysis establishes that there will be significant shortfalls in gas supplies to the Egyptian market in the decade ahead despite major new investments, efforts at energy saving, and the reduction of subsidies.

In the future, pipeline trade between Israel, Cyprus and Egypt may develop. The commercial case for re-exports via Egypt is stronger than the case for supplying the Egyptian market. Both scenarios, however, face legal, political, and commercial challenges. Moreover, a race between Israel and Cyprus might develop since Egypt may not be able to absorb gas from both. In the end, success in the pipeline trade will depend on finding a commercial structure that balances risks and reward for the different parties involved.

As regards the prospects of solving the Cyprus problem in relation to energy, Leigh said that the settlement will create stable conditions to attract investors and also conditions in the gas market that would allow the companies to proceed to further researches for natural gas reserves.
Michael Leigh, from Britain, is a consultant and senior advisor to German Marshall Fund. He focuses on European Neighborhood Policy, Eastern Europe, the Mediterranean, and the Middle East as well as the future of the EU. He is a former director-general for enlargement with the European Commission.