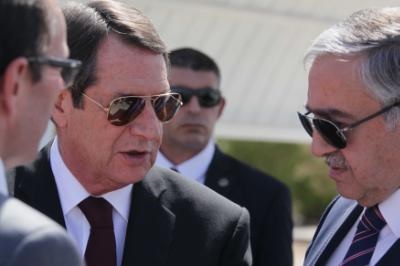 The leaders of the two communities in Cyprus, President of the Republic Nicos Anastasiades and Turkish Cypriot leader Mustafa Akinci will resume their discussions on Friday, in the framework of the UN-backed negotiations for a comprehensive settlement to the Cyprus issue.

The meeting will take place at 10am at the United Nations Protected Area in Nicosia under the auspices of the Special Advisor of the Secretary-General (SASG) Espen Barth Eide.

During their last meeting on the 12th October, the leaders agreed to significantly intensify the pace of their meetings, acknowledging that still there is serious work ahead.

Cyprus has been divided since 1974, when Turkish troops invaded and occupied 37% of its territory. Anastasiades and Akinci have been engaged in UN-backed talks since May this year with the aim to reunite the island under a federal roof.