Leaders to discuss disagreements on property matters at Monday’s meeting 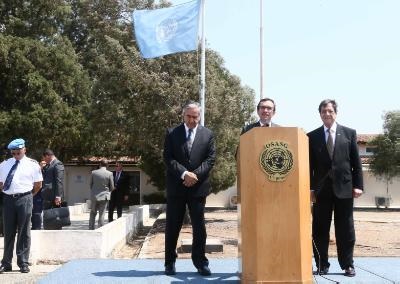 Disagreements on aspects relating to property issues are on the agenda of Monday`s meeting between President Nicos Anastasiades and Turkish Cypriot leader, Mustafa Akinci, as they meet a second time in July, their seventh since Akinci came to power in April this year, in the context of the UN-led talks for a solution of the Cyprus problem.

According to CNA sources, the negotiators of the two sides discussed on Friday the agenda of the leaders` meeting which will take place at the UN Protected Area, in the now defunct Nicosia international airport. Governance, power-sharing and property issues with criteria on territory are expected to be part of the leaders’ discussions. Most of the disagreements focus on the last two issues, according to the same sources, which point out that there are disagreements but there are also political understandings on all issues.

Special Adviser of the Secretary-General on Cyprus Espen Barth Eide, speaking after the previous meeting on Friday, July 10th, said that the process is moving forward at a quite impressive speed, and that is due to the leaders` contribution and asked all parties to respect the confidential nature of the negotiations, because that has to be an integral dimension of the talks.

This will be the first meeting of the leaders of the two communities in Cyprus after Eide briefed UN Security Council on the peace talks last Wednesday. Gerard van Bohemen, UN Security Council President and Permanent Representative of New Zealand, said after the briefing that “we had kind of the unusual experience of getting a very positive briefing which we all took great pleasure from”.

Cyprus has been divided since 1974 when Turkey invaded and occupied its northern third. The leaders of the two communities, President Anastasiades and Turkish Cypriot leader Akinci have been engaged in UN-backed talks since mid May with the aim to reunite the island under a federal roof.