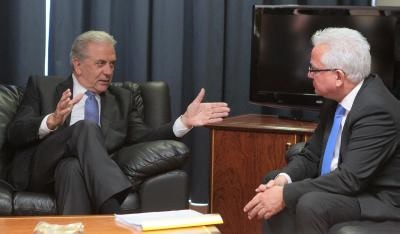 Justice Minister Ionas Nicolaou asked for EU solidarity and funding that will make possible Cyprus’ participation in the Union`s missions to patrol the maritime area in the Eastern Mediterranean.

Nicolaou met on Thursday in Nicosia with EU Commissioner for Migration, Home Affairs and Citizenship Dimitris Avramopoulos and discussed his Ministry`s competencies in the area of illegal immigration and the control of external borders.

The Minister stated after the meeting that Cyprus is considering its eventual participation in maritime missions in the Mediterranean, and the Middle East region in particular, through technical means as well as with human resources.

“We discussed our eventual participation in the `Poseidon` operations, that concern mainly the maritime area of the Eastern Mediterranean, from Greece and Turkey to Cyprus,” Nicolaou said.

Ionas Nicolaou also noted that he discussed with Avramopoulos the need to secure for Cyprus a number of vessels and a small airplane for monitoring, as well as search and rescue purposes.

The Minister said the issues raised were met with understanding on the part of the EU Commissioner.