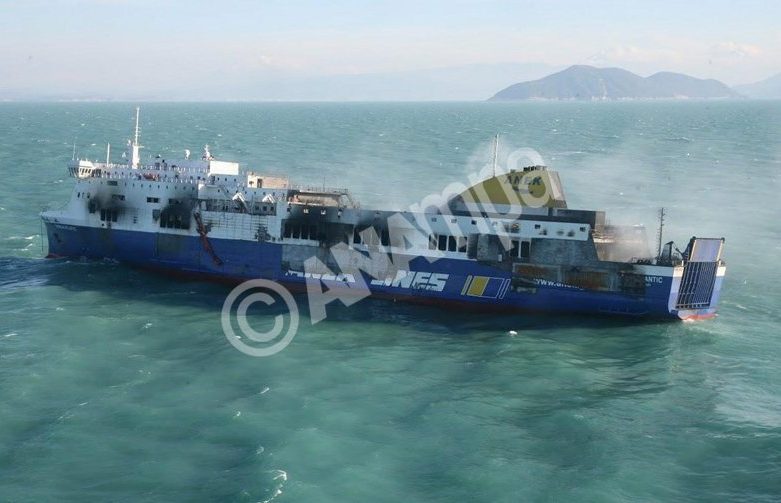 ANA-MPA — Italian authorities have revised their estimate of the numbers on board the fire-stricken ferry “Norman Atlantic” downward to 485, according to the latest passenger list sent to Greece’s shipping ministry on Friday. Meanwhile, the Italian media on Friday published the names of four individuals charged in connection with the ferry disaster, which has so far claimed at least 13 lives.
According to the reports, including one by the Italian news agency ANSA, a Bari prosecutor has pressed charges against legal representative of ship’s charterer ANEL lines in Italy, whose name was not given, ANEK lines employee Pavlos Fantakis, and crew members Luigi Iovine and Francesco Romano.
The new passenger list from the Italian side gives a lower estimate than the 499 passengers and crew cited by a Bari prosecutor on Wednesday but may still contain double entries, sources at the shipping ministry said. They also noted that there was now confirmation that the ship was not carrying excess passengers.
The highest number of passengers allowed to board the “Norman Atlantic” based on its protocol was 499, the number cited by the Bari prosecutor. According to the latest update from the ship’s charterer ANEK lines, the number of people on board the vessel came to 474.
The Greek shipping ministry also announced that one more Greek passenger, who had been admitted to an Italian hospital after his ordeal, was returning to Greece on Friday.
The Greek Maritime Accidents Investigation Service has sent a team of inspectors to Italy, while inspectors will also be sent by ANEK.
Also due to arrive in Italy are relatives of the 10 Greek passengers that are listed as missing.
Meanwhile, there continues to be a significant discrepancy between the figures for the missing passengers given by Italian and Greek authorities, with the former placing their numbers at 90 and the latter at just 18, the Italian news network Tg5 said on Friday.
It added that “some names may have been included in the Italian lists of passengers, perhaps more than once, in a slightly different spelling.”
The ship has been towed amid adverse weather conditions to Brindisi port.
One of the prosecutors handling the case, Ettore Cardinali, is going to Brindisi to board the ship and determine whether there are any deceased in its hold.
Italian authorities have officially notified Greek authorities that they had identified two dead Greek nationals while, another 10 persons are considered missing.
The centre of operations in Rome (RCC ROMA) on Thursday officially notified the Search and Rescue Coordination Centre of the Greek Coast Guard that, due to the incorrect identification by the Italian authorities, Greek national Georgios Doulis is not considered dead but is included in the passengers list and is among the people on whom there is no information available for the time being.
Shipping ministry officials on Thursday contacted Doulis’ son, who thanked them for their prompt reaction.
Shipping Minister Miltiadis Varvitsiotis issued a call to all port authorities in Greece to assist with accommodation and transportation any relatives of passengers or crew on the “Norman Atlantic”.
Authorities in Greece have also launched an urgent inquiry into the circumstances of the “Norman Atlantic” ferry disaster, it was announced on Friday. The head of the Piraeus public prosecutors’ office has asked the Piraeus Central Port Authority to determine whether the ship was in compliance with safety regulations and whether all required safety precautions to ensure it was fit to sail had been met.
Judicial sources said the prosecutor has asked for an investigation into when the ship inspections took place and whether all fire safety and life-saving standards were met, as well as a copy of the accident report by Italian authorities and evidence from the Italian authorities’ investigation, given that the ship is now in foreign territory.
On the basis of the Schengen treaty, Italian authorities are obliged to respond to such requests by the Piraeus port authority, while the Pireaus prosecutor may also request some depositions at the end of the process.
The Piraeus prosecutor ordered the urgent preliminary inquiry in connection with two criminal offences, disuption of maritime transport capable of endangering human life and resulting in deaths, and also for arson.
In statements to the ANA-MPA, a representative of ANEK lines, which had chartered the “Norman Atlantic” from the Italian company Visemar di Navigazione SRL, said the Greek shipping line had asked that some Greeks paid by ANEK be included in the crew but that, based on the charter agreement, the Italian company was responsible for safety and crew as a whole.