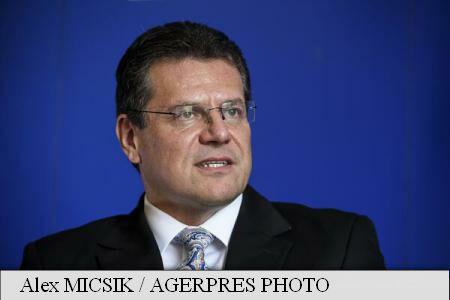 Romania plays a very important role on the energy market in the region and “will definitely consolidate its role as a regional energy hub for the South-East Europe and the Western Balkans,” European Commission Vice-President for Energy Union Maros Sefcovic said in an interview to AGERPRES.

According to him, Romania and its interconnectors will be very important for the energy security in Europe and there are several prospects of having pipelines going through its territory.

The EC Vice-President pointed out that the design of the European electricity market should be changed and that a better integration of renewables in the energy mixes is needed and underscored that the guidelines on the state-aids for renewable energy have been adapted in order to have a much more harmonious approach of the manner in which the renewable energy is supported.

The European Commission representative also spoke in the interview of the emergency plan on the security of the natural gas supply the Romanian authorities sent to the EC, the emissions scandal involving Volkswagen German company, as well as of the projects concerning the European energy market.

AGERPRES: Romania has sent the emergency plan on security of gas supply after being sued in the Court of Justice of the EU. What is the European Commission opinion on this plan?

Maros Sefcovic: We received the drafts of this plan, they are currently in expert assessment and from talks with Romanian authorities we see that the proposal was very well prepared so I believe that after the final touches, and the consultations, the plan will come to Brussels and I believe we will resolve this issue without any problems.

AGERPRES: The green certificates trading scheme will be reviewed. This new scheme will take into account requests of producers from steel industry?

Maros Sefcovic: We started this green certificates scheme, it was not identified by the European Commission as a state aid. We started it, we approved it, so I believe that this problem will also be resolved and also steel producers would benefit from the decision. More…