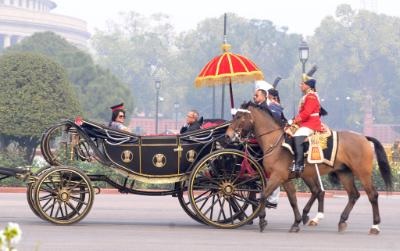 India`s President Pranab Mukherjee has expressed satisfaction with bilateral cooperation with Cyprus, both on a multilateral level, as well as for the support Cyprus lends to India at international fora.

He was speaking during an official ceremony in New Delhi, as he received the credentials of the new High Commissioner of the Republic of Cyprus to India, Demetrios Theophylactou.

According to an official announcement, during a tête-à-tête meeting later, Mukherjee welcomed Theophylactou and conveyed his personal wishes to the President and the people of the Republic of Cyprus.

Theophylactou expressed Cyprus` gratitude for India`s support to the efforts for a Cyprus solution, on the basis of international law, which will reunite the country, divided since the 1974 Turkish invasion.

He also conveyed condolences for the victims in the northern part of India, following the devastating earthquake in neighboring Nepal.