I will not give in to pressure to return to negotiations under threat, President says 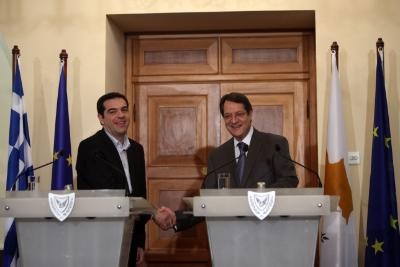 President Nicos Anastasiades has made it once more clear that he is not willing to accept any pressure to return to the negotiating table under threat or blackmail to achieve a solution imposed by military force.

In his toast at the official dinner in honor of Prime Minister of Greece Alexis Tsipras, President Anastasiades said that the Greek Premier`s visit to Cyprus “at a crucial time for our people is proof of Greece`s long standing interest and concern for the survival of Cypriot Hellenism.”

Anastasiades expressed on behalf of all the Cypriot people and himself personally warm thanks for the Prime Minister`s public and recurrent statement that Cyprus is his highest personal priority.

He also thanked the Greek political leadership and the entire Greek people for their timeless, selfless and sincere support towards Cyprus and Cypriot Hellenism.

“Today we are faced with dangerous and provocative behavior from Turkey. Its actions, few days before the commencement of the substantive phase of dialogue, constitute a flagrant violation of Cyprus` sovereign rights in its Exclusive Economic Zone, ” he pointed out.

Nicos Anastasiaded made it clear to those who have the ability to intervene “that I am not willing to accept any pressure to return to a dialogue under threat or blackmail to get to a solution imposed by military power.”

He reiterated that the natural wealth of the country belongs to the State and that all legal residents and consequently the Turkish Cypriot as well will benefit from its use and exploitation after the solution of the Cyprus problem.

Therefore, he said military threats and illegal interventions purportedly in the name of the Turkish Cypriots do not help, but on the contrary they remove the prospects of a solution and weaken the possibility of using the incentive towards this goal provided by the natural wealth.

He expressed satisfaction with Prime Minister`s assurance that cooperation between Greece and Turkey – to be effective – must be based on respect of international law and the prospect of a just and viable solution to the Cyprus problem.

He reiterated the Greek Cypriot side`s genuine will and determination to work tirelessly so that Cyprus would evolve into a modern European state, a state of peace and prosperity, in a bi-zonal, bi-communal federation where human rights of all citizens would be guaranteed on the basis of the European Union`s principles and values.

The President called on those who really want to contribute towards a solution to use their influence and persuade Turkey to remove all challenges in order to resume the dialogue away from threats and blackmail.

Cyprus has been divided since 1974 when Turkey invaded and occupied its northern third. Numerous UN-backed rounds of negotiations to reunite the island under a federal roof have not yet yielded result. Turkey is the only country in the world which does not recognize the Republic of Cyprus. Ankara has not withdrawn its military troops from Cyprus despite repeated calls from various European and international institutions.