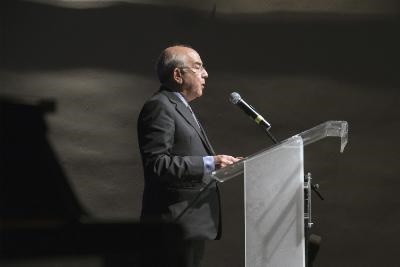 Relations between Cyprus and Israel and the people of the two countries have improved drastically in recent years as a result of the common concerns, interests, principles and values shared by the two nations and their people, President of the House of Representatives Yiannakis Omirou.

The House Speaker met yesterday in New York with members of the American Jewish Committee (AJC), a meeting attended also among others by the Regional Director of AJC Schott Richman and member of AJC Board of Directors responsible for Cyprus Mona Abramson.

Omirou said that the agreements signed between Israel, Greece and Cyprus is proof of the improvement of relations between the countries.

The three countries have deepened their cooperation in the fields of security, energy and the possibilities and prospects for further development and strengthening these relations are enormous, he said.

He thanked the American-Jewish Committee for its firm support for a solution to the Cyprus problem based on UN Security Council resolutions on Cyprus which will put an end to the Turkish military occupation and reunite the people, the country, the institutions and the economy.

Omirou reaffirmed Cyprus` firm position for a solution to the Middle East with the resumption as soon as possible of the peace process based on the resolutions of the Security Council.

Cyprus` Speaker of parliament wraps up his visit to New York on Friday, where he participated in the 4th World Conference of Speakers of Parliament with a press conference for the Overseas Cypriots media and Greek correspondents.

On Thursday evening, Omirou attended a dinner hosted in his honor by top officials of Cypriot community and Greek-American community organizations whom he briefed on the developments in the Cyprus problem.