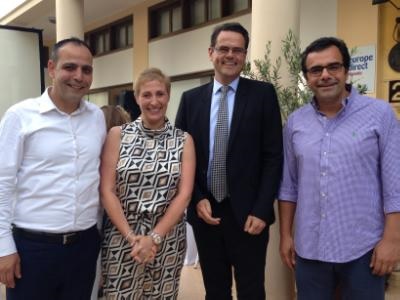 The Home for Cooperation celebrated four prosperous years of its positive contribution to the peace building and to the culture of cooperation in Cyprus with an event that took place last Tuesday.

The motto of the event was “Love recognizes no barriers”. According to a press release, the celebration opened with an event at Ledra Palace Crossing which transformed into a happy, colourful and vibrant road for one hour.

The ceremony was addressed by Nicosia Mayor Constantinos Yiorkadjis, the “mayor“ of occupied Nicosia Mehmet Harmanci, Ambassador of Norway Sjur Larsen, the Communications Officer of the Home Yaprak Aydın and Salpy Eskidjian, from the Governing Board of the Home for Cooperation.

Nicosia Mayor said that Home for Cooperation represents the vision for a sustainable future for Cyprus and all its citizens. Harmancı added that the goal has always been to raise awareness in relation to the reunification of the island.

Addressing the event Eskidjian said that “it is no longer unusual to see a cleric, an educator, a drummer, a cyclist, a basketball player, a UN official, a mayor, a yoga teacher, an actor, a singer, a politician, a hip hop dancer, a researcher, a journalist and more, feeling at home at the Home”.
She described it as a success story pointing out that this would have been impossible without local and international support and trust.

“We will continue to support the Home’s activities. Now the Home is an exception; after the solution it will become an example. Its role has already extended the pre-solution period”, he added.

Cyprus has been divided since the 1974 Turkish invasion. The leaders of the two communities, President Nicos Anastasiades and Turkish Cypriot leader Mustafa Akinci, are currently engaged in UN-backed talks with the aim to reunite the island under a federal roof.