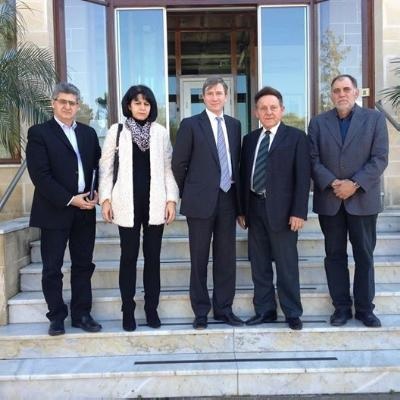 British High Commissioner in Cyprus Ric Todd has pointed out that the British Government supports efforts to bring the tragedy of the missing persons in Cyprus to a close, acknowledging the importance of trust and respect between the two communities in a viable Cyprus solution.

According to a press release issued by the British High Commission, Todd met on Monday with a delegation of the Community Council of the occupied village of Ashia. Speaking during the meeting, the Commissioner said that the relatives of the missing persons in Cyprus can always rely on the UK to keep raising the humanitarian issue, adding that every day he is struck by how extremely close the human ties between Cyprus and Britain are.

Furthermore he expressed the full support by Britain to the work of theCommittee on Missing Persons (CMP). Todd expressed his gratitude to the relatives of the missing of the village of Ashia, for their presentation noting that “diplomats have to remember”.

The delegation presented the HC with a petition.

According to the recent report of the UN Secretary General on the United Nations operation in Cyprus, as at 18 December 2014, the Committee’s bicommunal teams of archaeologists had exhumed the remains of 948 missing persons on both sides of the island and the remains of 564 individuals have been returned to their respective families, including 135 during the reporting period (June-December 2014). The total number of missing persons identified in 2014 now stands at 157, the highest in any given year, it is noted.