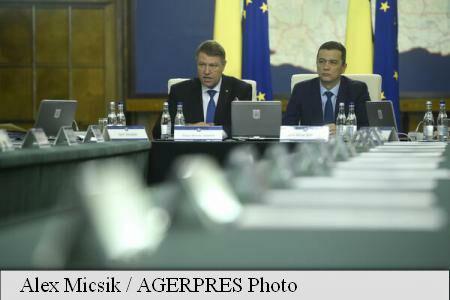 Prime Minister Sorin Grindeanu on Wednesday said that in the Government meeting “the things communicated in due time” were discussed, pointing out that, according to the Constitution, “we are allowed to grant pardon and amnesty,” therefore these things “aren’t against the law.”

However, the added that these topics weren’t discussed “regardless of President Iohannis’ presence,” as they weren’t on the meeting agenda.

“According to the Constitution, are we allowed to grant pardon and amnesty? Does the Constitution say we are allowed (…) to do this? yes. Therefore they aren’t against the law. (…) I believe that it is as constitutional as President Klaus Iohannis came to chair the Government meeting, it is as constitutional, with the observance of the law, to issue an emergency ordinance in all the areas the law allows us to. As it wasn’t on the agenda communicated from time to you (…) which we had yesterday in the working folder, we couldn’t adopt matters on additional points,” the PM told journalists.

He pointed out that neither the conflict of interest nor the abuse of office will be decriminalized, but “these things will be clarified from the perspective of the Justice Ministry, in accordance with the Constitutional Court decisions.”

The PM explained that it concerns two proposals of the Justice Ministry — one regarding pardon, “which doesn’t include corruption offenses and violence or organised crime offenses,” and the other one — the transposition of a European directive on the citizens’ rights to a fair trial.

The Prime Minister maintained that the discussion he had with Klaus Iohannis wasn’t related to pardon and the modification of the criminal codes, but that it was only a question of the head of state referring this topic.

“The discussion [with Klaus Iohannis] wasn’t regarding what you are saying. It was a question of the President if these drafts are on the agenda. I assured him that these drafts are not on the agenda and that all things I have mentioned earlier will be covered, namely (…) these proposals of the Justice Ministry were sent this morning to the Superior Council of Magistrates and all the other institutions,” the PM told journalists.

Referring to pardon and the amendment of the codes, he pointed out that these things can be done either by emergency ordinance or in Parliament. More…