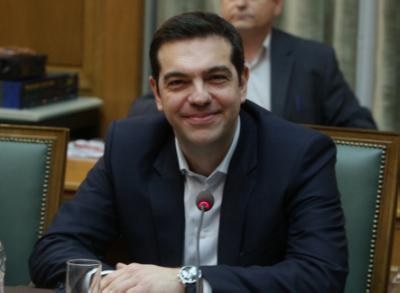 Greek Prime Minister Alexis Tsipras has stressed his country`s support to a just and viable solution to the Cyprus problem, on the basis of UN decisions and urged Turkey to support the ongoing talks, bearing in mind the dynamic towards a solution that prevails on the island.

Tsipras was speaking after meeting with his Turkish counterpart Ahmet Davutoglu on the sidelines of the UN General Assembly.

Tsipras also met with Secretary-General Ban Ki-moon with whom he discussed the Cyprus talks and the Secretary-General welcomed the progress made by the leaders of the Greek and Turkish Cypriot communities in the process.

“The Secretary-General underlined the importance of the Hellenic Republic’s continued support in this context”, a UN statement said after the meeting.

Speaking to overseas Greeks on Tuesday evening, Tsipras said “the Cypriot government’s efforts for a viable and just solution to the Cyprus issue should be reinforced”.

He also underlined that there cannot be a fair solution if it does not provide for the withdrawal of the occupation troops from the island.

Tsipras met with representatives of the Greek Diaspora, and concluded his meetings in New York with a dinner organized by the country’s permanent representative.

He talked of the need to create the preconditions not only for the country`s economic revival but also to solve critical national issues that remain pending, naming the Cyprus issue, which he described as an open wound for 41 years now.

Cyprus has been divided since 1974 when Turkish troops invaded and occupied the island`s northern third. UN-led talks, aiming to reunite the island under a federal roof, resumed on May 15, this year.