Greek President on official visit to Cyprus on Monday 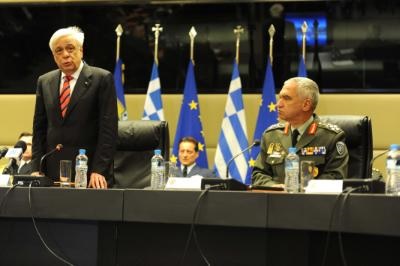 President of the Hellenic Republic Prokopis Pavlopoulos will be traveling to Cyprus on Monday on a two-day official visit.

This is his first visit abroad since he was sworn in as seventh President of the Hellenic Republic.

The official welcoming ceremony will take place at the Presidential Palace. Right afterwards the two Presidents will have a tete-a-tete meeting, followed by consultations of the delegations of the two sides and statements to the press.

According to his schedule, President Pavlopoulos will also meet Archbishop Chrysostomos and President of the House of Representatives Yiannakis Omirou.

He will address the House Plenary in the afternoon and have meetings with the parliamentary political parties. In the evening, the Greek President will attend a formal dinner hosted by President Anastasiades at the Presidential Palace.

During the second day of his visit, the Greek President will visit the “Green Line” dividing the capital Nicosia in two, the northern Turkish occupied part and the southern government controlled area. He will be accompanied by Nicosia Mayor Constantinos Yiorkadjis.

Before departing, he will visit the Greek contingent camp in Malounda, based in Cyprus in line with the provisions of the 1960 Constitution which established the Republic of Cyprus.