Government: We want to secure no change in the country’s demography 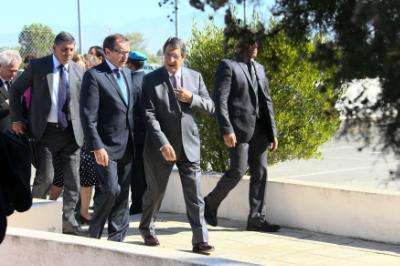 Replying to questions from the press, he said part of the ongoing UN-led peace negotiations includes discussions on who will have Cypriot citizenship, but so far no agreement on this issue has been reached.

“What we are working on is to ensure that there will be no change in the Republic`s demographic character in comparision to the state of play in 1960,” when Cyprus became an independent state, he said.

Replying to other questions about illegal Turkish settlers, who have flooded the island`s northern Turkish occupied areas since Ankara invaded in 1974, he said he would not comment in public on the position of the Greek Cypriot side while negotiations on the issue continue but noted that this topic is being discussed within the context of the property issue and that of citizenship.

“What we are discussing at present is who will have Cypriot citizenship. The property issue relates to other important aspects of the Cyprus question and one of them is the issue of the settlers. On Monday the criteria relating property matters and other concerns will be on the negotiating table,” he added.

The Spokesman reiterated that it is very important to see to it that the owner has the first word on his property.

On a different matter, Christodoulides announced that President Anastasiades is expected to visit in October a permanent member of the UN Security Council. In mid September he will meet British PM in London.
CNA GS/MM/2015
ENDS, CYPRUS NEWS AGENCY