Government Spokesman to hold meetings in the US 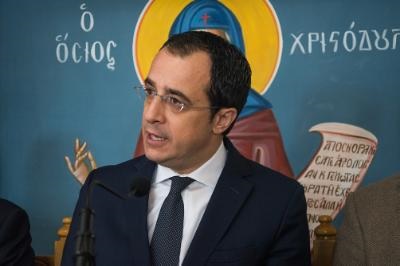 Government Spokesman Nikos Christodoulides arrives in the US on Tuesday for contacts with officials in Washington and New York. In addition to having meeting, he will represent the President of the Republic at the Cyprus Federation of America conference.

In Washington, the Spokesman will meet on Wednesday with Amanda Sloat, Deputy Assistant Secretary of State in the Bureau of European and Eurasian Affairs, Dr. Michael Carpenter, special advisor for Europe and Eurasia, Office of the Vice President and William Tuttle, director for Turkish, Greek and Cypriot Affairs, National Security Council.

In New York, Christodoulides will meet Elisabeth Spehar Director of the Europe Division
at the Department of Political Affairs at the UN headquarters, permanent members of the Security Council and Executive director of the American Jewish Committee David A. Harris.

On Friday Christodoulides will be received by his Eminence Archbishop Demetrios of the Greek Orthodox Archdiocese of America at its NYC headquarters and will be honoured by the Pampafios Association of America with the Evagoras Palikarides award.

On Saturday he will take part in the CFA conference where he will deliver President Nicos Anastasiades` address and brief delegates on the latest developments on the Cyprus problem.

He will attend a Gala dinner to mark Greek Independence Day, March 25, which will honour the New York Governor Andrew Cuomo and on Sunday he will attend the Archieratical Divine Liturgy and Doxology at the Cathedral of the Holy Trinity.

The Spokesman will also attend the Greek Independence Day Parade at Fifth Avenue.