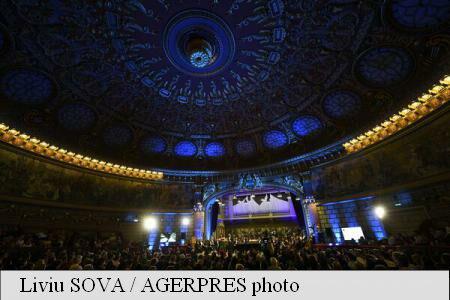 Victoria Vassilenko (Bulgaria) is the winner of the Piano Section of the “George Enescu” International Competition, after being elected on Sunday evening at the Romanian Athenaeum.

Victoria Vassilenko, 23, graduated from the National Music School in Sofia and the “Queen Sofia” Music College. Since 2014, she is a student with the New Bulgarian University and since 2015 she enrolled in the Lake Como International Piano Academy.

The audience attending the competition in the grand hall of the Romanian Athenaeum could listen in the Piano Section Final, three orchestra concerts played by the three finalists of the section: Rachmaninov — Piano Concerto No. 2 in C minor, Op.18 in the interpretation of pianist Danor Quinteros (Chile), Brahms — Concerto Nr. 1 in D minor, Op. 15 interpreted by pianist Victoria Vassilenko (Bulgaria) and Rachmaninov — Piano Concerto No. 2 in C minor, Op.18 interpreted by Takuma Ishii (Japan). The “George Enescu” Philharmonic Orchestra was conducted by John Axelrod.

The George Enescu Competition 2016 edition completed with a surprise event held in front of the Romanian Athenaeum where the public was invited at the end of the Piano Section, right during the break the jury deliberated in. For the first time in the history of the symbol building, the artists and the public’s dreams transformed the Athenaeum’s facade in a mapping — video titled” Live your dream”, inspired by George Enescu’s music and values. More…