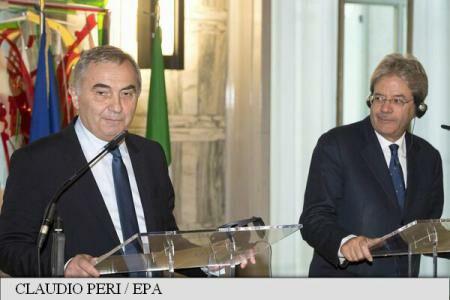 Foreign Affairs Minister Lazar Comanescu on Tuesday had a meeting with his Italian counterpart Paolo Gentiloni, the two dignitaries having approached during the talks both the dynamics of the bilateral relations between the two countries and topical matters on the European agenda.

According to a Foreign Affairs Ministry (MAE) release sent to AGERPRES, Foreign Minister Comanescu paid a working visit to Rome on Tuesday, during which he had meetings with his Italian counterpart Paolo Gentiloni and with Secretary for Relations with States within the Holy See’s Secretariat of State Paul Richard Gallagher.

MAE points out that during the meeting with the Italian Foreign Affairs and International Cooperation Minister it was highlighted the privileged relation between Romania and Italy, based on the consolidated strategic partnership between the two countries.

“The dynamics of the high-level bilateral relations over the recent period, the consistent cooperation in the economy and culture areas are edifying in this respect. At the same time, it was highlighted the existence of a significant potential of further developing and strengthening the bilateral relations. Both dignitaries stressed the importance of the presence of a significant Romanian community in Italy, very well integrated and which contributes to the economic and social development of Italy. The Romanian community in Italy, same as the particularly active Italian business community in Romania are solid bridges between the two societies,” the cited release reads.

Approaching topical matters on the European agenda, the Romanian and Italian ministers agreed on a strengthened cooperation meant to contribute to the further consolidation of the European project, MAE also informs.

In respect to the migration issue, Minister Comanescu voiced Romania’s solidarity with the states on the first line and reiterated the consistent involvement of Romania in implementing the measures agreed on EU level.

“The two ministers also discussed the developments in the EU neighbourhood, Minister Lazar Comanescu having highlighted the importance of consolidating the Eastern partnership, as instrument aimed at developing a security, stability and prosperity space in the vicinity. Referring to the Republic of Moldova, he supported the continuation of implementing the reform agenda, with the observance of the assumed commitments, and, on this ground, the continuation of EU’s supporting the European path of this country. Both sides underscored the requirement of a greater assertiveness of the EU as an actor and the relevance that the EU’s southern and eastern vicinity has in this demarche,” the release also mentions.

The foreign ministers also reiterated the support for the EU’s enlargement process and the European integration of the states in the Western Balkans, showing that Romania and Italy can contribute to the process progress.

The visit to Rome included a lecture of the Romanian chief diplomat to the Roma Tre University, the Political Sciences Department, on the topic “The European Union at crossroads: Working together for a better and more cohesive Europe — The Romanian perspective.” Moreover, Minister Comanescu had a meeting at the Accademia di Romania with Romanian students, professors and researchers living in Italy. More…