First phase of excavations for Greek military plane wraps up 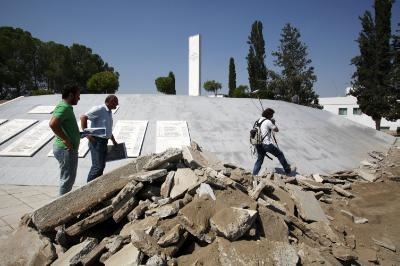 The first phase of excavations to locate a Greek military plane, shot down by friendly fire during the 1974 Turkish invasion of Cyprus, has concluded earlier than expected and next week the second and most crucial phase of the whole operation is set to begin.

A geophysical study will be carried out in cooperation with the Geological Survey Department.

Presidential Commissioner for Humanitarian issues Photis Photiou will be briefing the press this morning on the progress of the work carried out so far.

In statements to CNA recently, Photiou said that the geophysical survey will take place in order to search at a depth of 10-15 meters where the excavations of the second phase will start.

He explained that the second phase is the most important one aiming to locate the fuselage of the plane as well as other debris but first and foremost the remains of the Greek airmen on board.

The aircraft was part of a secret mission from Greece to send reinforcements to the Greek Cypriot National Guard fighting the advancing Turkish troops, equipped with the state of the art military hardware, which invaded Cyprus on July 20, 1974. The plane was shot down on July 22 by friendly fire as Greek Cypriot soldiers mistook it for a hostile aircraft. All but one of its airmen were killed. Thirty-two men were on board the Greek NORATLAS.

The Council of Ministers decided in February 2014 to proceed with the excavations for NORATLAS following a case against the Republic of Cyprus brought before the European Court of Human Rights (ECHR) in 2007 by the families of two Greek military officers who perished in NORATLAS. The Court unanimously declared the application by the families of the dead airmen inadmissible.