FinMin Varoufakis to FT: Greece will opt for debt swap, rather than writeoff 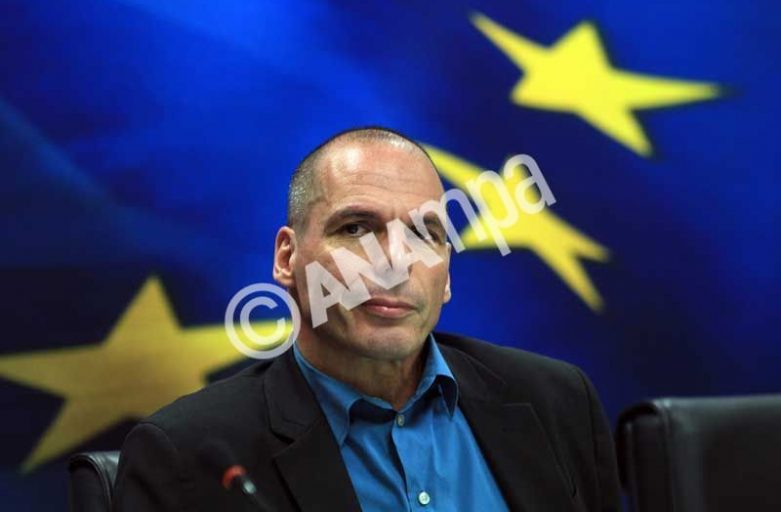 ΑΝΑ – ΜPA — Greece will not call for a writeoff of its debt but request a “menu of debt swaps,” including two types of new bonds, new Finance Minister Yanis Varoufakis told the Financial Times (FT) on Monday.

According to the daily, Greece “unveiled proposals on Monday for ending the confrontation with its creditors by swapping outstanding debt for new growth-linked bonds, running a permanent budget surplus and targeting wealthy tax-evaders.”

Varoufakis told the FT that the two types of bonds would include bonds indexed to nominal economic growth and replacing European rescue loans, on the one hand, and “perpetual bonds”, replacing Greek bonds owed by the European Central Bank, on the other. The proposal, he told the FT, would be more acceptable to other countries who objected to any plans for a “haircut”.

“What I’ll say to our partners is that we are putting together a combination of a primary budget surplus and a reform agenda,” he was quoted as saying, adding that “I’ll say, ‘Help us to reform our country and give us some fiscal space to do this, otherwise we shall continue to suffocate and become a deformed rather than a reformed Greece’.”

Varoufakis said the government would maintain a primary budget surplus – after interest payments – of 1 to 1.5 per cent of gross domestic product, even if this meant Syriza, the leftwing party that dominates the ruling coalition, would not fulfil all the public spending promises on which it was elected.

In terms of tax collection, the finance minister said the government would target wealthy Greeks who had not paid their fair share of taxes during the nation’s six-year economic slump, which he described as “going for the head of the fish, then (going) down to the tail.”

According to official sources, Prime Minister Alexis Tsipras is expected to announce the government’s policy programme on the weekend and the details of their economic plan to their EU partners before the end of February.

“Whatever our partners think about our being from the radical left, we’re serious about reform, serious about being good Europeans and serious about listening. The only thing we shall not retreat from is our view that the current unenforceable programme [agreed with our creditors] needs to be rethought from scratch,” Varoufakis was quoted as saying.

According to the FT, Varoufakis is on a European tour that is aimed at winning support for a renegotiation of the 245bn euro bailout programme that began in 2010 with emergency help from the EU and International Monetary Fund.

The minister said Greece hoped to secure a four-month “bridging programme”, to stretch from now until June 1, under which the ECB would promise to keep Greece’s financial system afloat by continuing to supply liquidity on favourable terms.

Rather than ask for 7bn euros in aid that was to have been paid to Greece last year if it had met fiscal policy and structural reform conditions set by its creditors, the government would request only 1.9bn euros, the FT said, equivalent to the profits earned by the ECB from its purchases of Greek government bonds after the 2010 rescue, according to Varoufakis.

“Our mandate gives us a right to do one little thing – to have a few short weeks to propose our own ideas to the ECB, the eurozone partners and the IMF,” he was quoted as saying. “The notion that previous Greek governments signed on the dotted line on programmes that haven’t worked, and that we should be obliged to just follow that line unswervingly, is a challenge to democracy.”