Famagusta waste transfer station to be set up in Sotira municipality 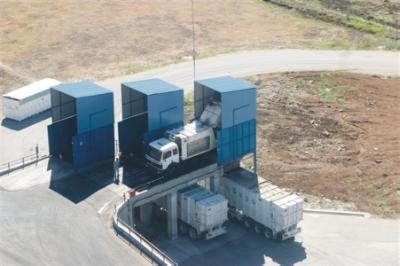 A waste transfer station for the Famagusta area is to be set up in Sotira, and is expected to be of considerable environmental value, according to Mayor of Sotira Georgios Takkas.

He also said that all operations would be safe and cost effective, adding that the municipality would be profiting from fees, which would be €2 per tonne for a total of approximately 50,000 tonnes per year produced in the area.

Furthermore, Takkas referred to measures that had already been agreed on for the exclusive management of the station by the Municipality of Sotira, the construction of two roads by the Famagusta District Office, and the employment of up to eight persons from Sotira.

“The Ministry of the Interior has approved a contribution on its behalf of €600,000”, he said, adding that the remaining funds would be gathered from the municipalities and communities of the Famagusta District”, he added.

Takkas said it was very important that the revenue from the station would allow the Municipality of Sotira to lower taxes or create a fund to be used to move the farming area further out.

He explained that the farming zone was at the entrance of the municipality and held an area of around 166,000 square metres.

Regarding the place chosen for the waste transfer station, Takkas said an environmental study was carried out, and that the Department for the Environment had already approved its construction.

Takkas noted that the project was very important and would solve the waste problem for the whole district.

** The interview is in the context of the project Rethink: Reduce- Reuse – Recycle which is funded by the EU programme LIFE+ (project code: LIFE13 INF/CY/000910) of the EU. Coordinating Beneficiary: CyBC. Partners: Green Dot Cyprus, Department of Environment, Cyprus Pedagogical Institute, CNA, Fost Plus Belgium **