EU had a late reaction in realizing the dimension of the refugee crisis, Commissioner and MEPs say 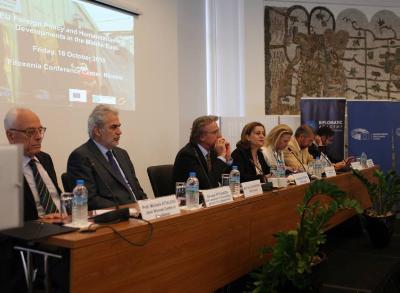 The European Union has not taken the appropriate measures on time in tackling the consequences of the refugee crisis and was very slow in realizing the dimensions of the problem, EU Commissioner for Humanitarian Aid and Crisis Management Christos Stylianides and MEPs Takis Hadjigeorgiou (AKEL-GUE) and Eliza Vozemberg (New Democracy-EPP) have said.

Commissioner Stylianides and MEPs Hadjigeorgiou and Vozemberg were the keynote speakers at a conference that took place in Nicosia Friday titled “EU Foreign Policy and Huminitarian Aid: Developments in the Middle East“.

Commissioner Stylianides said that the refugee crisis does not solely concern EU but it is rather an international problem that needs international cooperation and collaboration and action at all levels.

He highlighted the role of Cyprus, an island just 70 km away from Latakia in Syria, but at the same time an EU member state.

Commissioner Stylianides described the refugee crisis as the biggest crisis since the end of World War II, pointing out that the numbers of refugees have reached unheard levels.

He said that 12-13 million people have fled Syria as refugees or are internal migrants and should be provided with basic humanitarian assistance ie food, water and simple facilities.

He added that humanitarian issues require political solutions and that EU so far has been the biggest donor giving over €5 billion in aid.

Referring to Cyprus, Commissioner Stylianides said that it can be the example that demonstrates that co-existence of Muslims and Christians is not impossible.

MEP Takis Hadjigeorgiou, in his intervention, said that “we are faced with a global crisis”, pointing out that images of drowned bodies in the Mediterranean sea have led to a sympathy wave all over the world.

It is high time, he said, to show that politics can be moral as well. He said that EU should not develop into another military bastion, pointing out that our strength is our ideology.

Referring to Turkey, he said that the Arab Spring may soon turn into a Turkish winter with consequences for all and thus he urged the two leaders in Cyprus to have in mind that they do not have too much time in front of them to solve the Cyprus issue.

MEP Eliza Vozemberg said that “we are faced with a humanitarian crisis that affects millions of refugees and EU should rethink its role and the decisions it takes.”

She said that Europe as its whole was very slow in realizing the real problem, adding that it was not long ago that some EU countries stated that refugee crisis is only affecting the South.

Vozemberg added that solidarity should be accompanied by coherent policy and a common European strategy and should not be perceived as begging.

Ambassador Leonidas Pantelidis, Director for Middle East and North Africa at the Foreign Ministry, spoke about the Cypriot strategy at regional and international level, saying specifically that at the level of national regional policy, Cyprus is investing in activities like the trilateral forum between Greece-Cyprus-Egypt and Greece-Cyprus-Israel. “Our effort is to begin to cement the links and build the bridges necessary in the direction of what he calls a more politically and economically integrated region,” he said.

He referred to two recent examples of successful diplomacy in the region, one being the agreement of Iran with the 3+3 on the nuclear file and the second the destruction of Syria’s chemical arsenal. Both, he said, were possible because of what he calls successful multilateralism and persistent diplomatic engagement.

Dr. Michalis Attalides, Coordinator of the Jean Monnet Centre of Excellence at the University of Nicosia, spoke about the geopolitical developments in the Middle East and the challenges for EU external policy.

He noted that the refugee crisis is not resolved by building walls and fences nor by granting financial assistance to countries in need, or strengthening Frontex. What is needed he said, is a realistic foreign policy. He noted that the main conflict is between Sunni and Shia and only secondarily between some Muslims and some Christians.

Dr. Zenon Tziaras, Political Analyst at the Diplomatic Academy of the University of Nicosia, spoke about the impact of the Islamic State in the Middle East and Turkey.

He said that ISIS has changed the geo-political landscape of the region and strategic calculations of states across the world. He also added that Turkey is one of the countries affected the most by ISIS and that the refugee crisis has repercussions for economy and security in the country.

The Ambassadors of Greece, Italy and France as well as High Commissioner of the UK also made brief interventions at the conference.

Greek Ambassador Elias Photopoulos said that the protection of the refugees is a fundamental part of EU ideals and that global and comprehensive approach is needed that will yield permanent results.

Guido Cerboni, Ambassador of Italy said that his country has given $180 million to the West Bank and Gaza aid but now it had to redirect its aid to Syria. He said that crisis includes violence targeting women and girls, the youth as well as crimes against humanity, rape and sexual slavery.

Fighting Daesh is not only a security issue, said Luc Florent, Ambassador of France, adding that his country has mobilised its air force at the international Coalition. He said that political solutions are needed for stability in the region.

UK High Commissioner Ric Todd said that EU must do more for the refugees, adding that international and European collaborated action and cooperation is needed as well as cooperation with other countries such as Turkey.