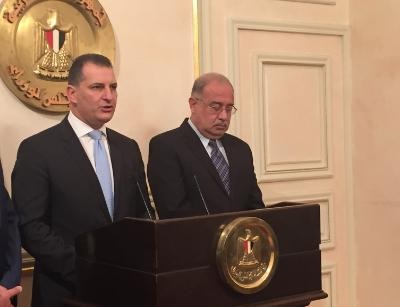 The development and exploitation of the Cypriot ‘Aphrodite’ gas field in block 12 of Cyprus’ Exclusive Economic Zone, will be done by stilling existing gas infrastructure in Egypt for the mutual benefit of the two countries, Energy Minister Yiorgos Lakkotrypis said.

Speaking Monday afternoon upon arrival from Egypt where he signed an MoU in oil and gas cooperation, the Minister noted that today Cyprus and Egypt have taken a very important step but explained that it takes time to conclude the agreement between the two countries because the terms need to be agreed in detail.

In particular, the MoU authorizes the Egyptian Natural Gas Holding Company (EGAS) and the Cyprus Hydrocarbons Company (CHC) Ltd to examine technical solutions for transporting natural gas, through a direct marine pipeline, from the «Aphrodite» field to Egypt.

It is noted that this will optimize the use of the gas infrastructure and achieve an added value for both countries.

This undertaking will be carried out in cooperation with concerned stakeholders in upstream and Liquefied natural gas (LNG) activities. The aim is to conclude an agreement within six months from the date of the signature of this Memorandum of Understanding.

A press statement issued following the MoU agreement says that ”this MoU is a significant step towards strengthening cooperation between Egypt and Cyprus in the field of oil and gas, which will further deepen the friendly relations between the two countries”.

Cyprus is currently developing natural resources discovered within its EEZ, and several international companies are involved in hydrocarbon exploration and exploitation activities.

Exploration and appraisal drilling in “Aphrodite”, in block 12 by Noble Energy and Delek has shown estimated reserves of 3.6 Tcf to 6 Tcf, namely 5 Tcf.