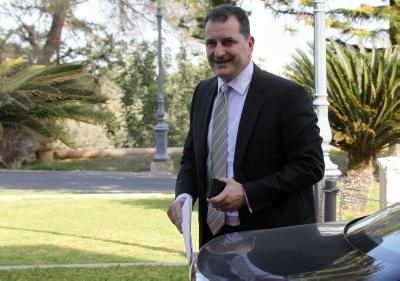 Cyprus` Energy Minister Yiorgos Lakkotrypis departs for London and Paris to attend business forums, aiming to attract investment in Cyprus. He will also hold meetings with representatives of energy giants.

According to an official announcement, the Minister will head a business delegation, organised by the Ministry of Energy, the Cyprus Chamber of Commerce and Industry and the Cyprus Investment Promotion Agency.

On Wednesday, the Minister will take part in the Cyprus-UK business forum, in London, promoting investment and cooperation opportunities in Cyprus.

On the afternoon of the same day, the Minister will meet with the Executive Vice President for Strategy Development of BG Group.

On Friday, October 9, he will attend in Paris the Cyprus-French business forum, as head of a business delegation.

Later on the same day, the Minister will have separate meetings with the CEO of Beicip, a consultant to the government on hydrocarbon issues, and the President of Exploration and Production of energy giant Total.