Eide to hold talks on Cyprus at Turkish Foreign Ministry 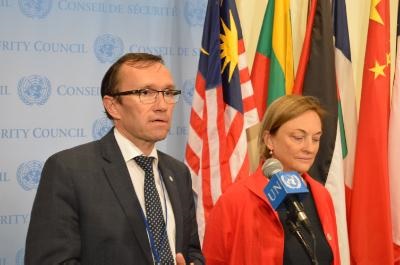 UN Secretary General`s Special Advisor for Cyprus Espen Barth Eide will hold meetings in Ankara to discuss the ongoing negotiations for the achievement of a solution of the Cyprus problem.

He added that Eide is expected to return to Cyprus by the end of August to attend the next meeting of the leaders of the two communities in Cyprus, President Nicos Anastasiades and Turkish Cypriot leader Mustafa Akinci on the 1st of September.

The Republic of Cyprus has been divided since 1974 when Turkey invaded and since then occupies 37% of this EU Mediterranean island`s territory. The leaders of the two communities have been engaged in UN-backed talks since mid May with the aim to reunite the island under a federal political system.

The negotiators of the Greek Cypriot and the Turkish Cypriot sides, Andreas Mavroyiannis and Ozdil Nami will resume their discussions on August 25 to prepare the next meeting of the two community leaders on September 1st.