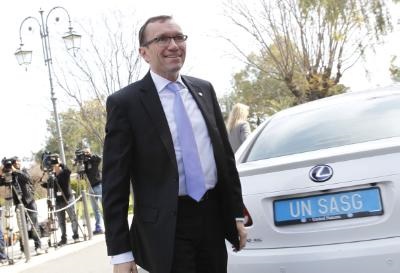 Eide, who arrived in Cyprus from Turkey on Monday, will be received on Tuesday morning by Anastasiades.

Later on Eide will hold a press conference at which he is expected to make important announcements.

The Greek Cypriot side has already said it is expecting to be informed by Eide about the state of affairs and Turkey`s actions, before making any decisions for a possible resumption of the talks.

The Greek Cypriot side has warned that if talks resume and Turkey violates again Cyprus` EEZ, it will have no other option than to suspend its participation to the talks once more.

The Turkish NAVTEX expired on Monday and Barbaros has left Cyprus` EEZ.

Cyprus has been divided since 1974, when Turkish troops invaded and occupied its northern third.