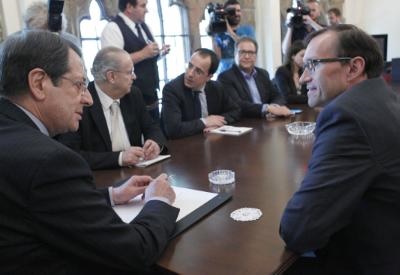 UN Special Adviser of the Secretary-General on Cyprus Espen Barth Eide has said a bizonal, bicommunal federation and full respect of the values and principles on which the EU is based, is the premise for the talks underway for a Cyprus settlement.

He was speaking to reporters after being received by President of the Republic Nicos Anastasiades ahead of the summer break. Earlier Friday, he met with Turkish Cypriot leader Mustafa Akinci.

The purpose of his meetings was to “look at the state of affairs, where we are now, and how we will organise the coming weeks and months and what are the issues as we will be focusing particularly on during September as at the end of September I will be back in New York at the General Assembly”.

Eide said the negotiations are in a very intense state and there have been meetings almost on a daily basis now, much of the summer and significant progress has been made. He said the negotiators will still meet next week until Friday and after a two-week break, meetings will resume later in August.

The next meeting of the two leaders is scheduled for the 1st of September.

Noting that things are moving in the right direction, Eide said there “is still a lot of work ahead of us and there is no reason for complacency. There is not time to lose and there will be many months of hard work before eventually a final deal can be presented”. He said this is happening in a spirit of leadership and commended the two leaders for the way that they are dealing with these issues.

Asked if the leaders will hold a joint meeting in New York on the sidelines of the UN General Assembly, Eide said that the “UN SG is very personally involved and follows this at least on a weekly basis. He knows the problem very well and reads the reports and is a strong supporter of the leaders. He will definitely meet the leaders when they are there in New York, as is tradition. Whatever else happens is something we have to come back when we get closer to the actual General Assembly”.

Turning his attention to the press, Eide said that he is a true believer in the importance of a free and critical press. However, he said “it should never happen to the detriment of truth”. According to Eide, a number of stories in some of the press lately were completely wrong or significantly misunderstood or quoted totally out of content”.

He said that at the end of the day when two referenda for the solution will be held on the island it is the responsibility of the press in how these issues are portrayed.

Eide said that in his meetings today, they discussed ways where they can open up more and this will be done after the summer holidays, so “we will be significantly more inclusive and open on what is going on because at that time there will probably be more comprehensive understanding”.

He pointed out that in the Turkish Cypriot press there was a certain misinterpretation “which is when all of us insist on a genuinely European solution that in any way means that we are moving away from the idea of a bizonal bicommunal federation. We are not. A bizonal, bicommunal federation and full respect of the values and principles on which the EU is based, is the premise for the talks. And that refers to the 11th February 2014 joint declaration and that stands carved and stoned and there is no change to that. What I am saying they are working to fulfil all these ambitions at the same time and it is my very strong conviction that is possible”.

Asked where the acquis communautaire says the user of property has rights, Eide replied that it has been established in legal decisions in European Courts, the European jurisprudence. “What I can confirm is that the leaders have agreed that there is an individual right to property, that will affect both dispossessed owners and current users but which remedies and how requires a very detailed list of categories but I think another misunderstanding which has developed is that one person has a right and another person loses his right that`s a misunderstanding”.

The misunderstanding is that either one person or another person can have a right, he added, noting that in modern thinking actually three people can have a right. “The question is which remedy is used to uphold that right. That can be reinstatement, it can be economic compensation, it can be alternative property, it can be exchange, there are many different remedies that can be used. The hierarchy of this has to be settled. There are of course various views exactly on the hierarchy made but when we say we have to have a European solution that means we have to have a European solution also and this is quite clearly established in modern European jurisprudence that there are right of original owners and rights of current users. And if you want a European solution you have to respect that that is modern European thinking”, he concluded.

UN-backed talks between President Anastasiades and Turkish Cypriot leader Akinci resumed in May, aiming to reunite Cyprus under a federal roof. Cyprus has been divided since the Turkish invasion of the island in 1974.
CNA/EC/AAR/2015
ENDS, CYPRUS NEWS AGENCY