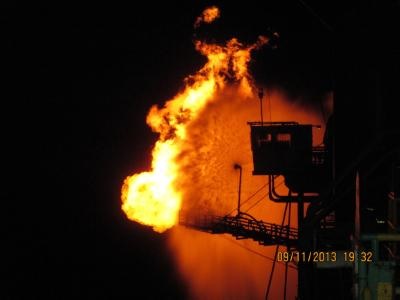 The big discovery of natural gas reserves within Egypt`s exclusive economic zone in a block adjacent to the Republic of Cyprus` blocks enhances the geostrategic and geopolitical role of the Republic, Cyprus President Nicos Anastasiades said on Tuesday.

The discovery does not deteriorates ongoing talks with the neighbouring country on the transport of natural gas from Cyprus` own block 12, the President said.

President Anastasiades, who was replying to questions at the Presidential Palace upon his return from his meeting with Turkish Cypriot leader Mustafa Akinci, said that he sees the great discovery in the Egyptian EEZ “definitely as a positive”.

“If you consider that our blocks, 10, 11, 12 are adjacent and are situated in a mere six kilometers distance you can reach the conclusion that no-one can say that the areas in which such large quantities are to be found do not extend to the neighbouring blocks,” he added.

He further noted that there are other factors to take into consideration including the fact that Cyprus` geostrategic and geopolitical role will be enhanced.

“The great natural gas reserves in the Mediterranean are and will continue to be of great interest to the EU as an alternative energy source,” he said.

Without Cyprus natural gas cannot be channeled to Europe nor Turkey, he pointed out.

If one assumes that Turkey will seek to restore its relations with Israel and Egypt in order to have access to the provisions of natural gas which it needs, it will have to solve the Cyprus problem, President Anastasiades said.

Asked whether the new discovery upsets in any way ongoing talks between the Republic of Cyprus and Egypt for the transport of natural gas from block 12 to the neighbouring country, he said “quite the contrary.”