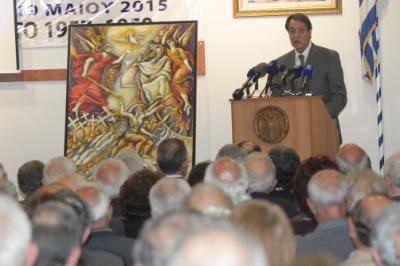 Cyprus President has underlined that the government continues with sincerity, determination and boldness its efforts for a settlement to the problem of Cyprus, divided since the Turkish invasion of the island in 1974.

He stressed the need for a peaceful settlement that will allow the establishment of a modern European state and will give both Greek Cypriots and Turkish Cypriots the opportunity to co-exist on the island.

Anastasiades noted that this must be done within conditions of security, democracy, by safeguarding human rights and by making sure that there is no danger for events, that took place in the past due to the Turkish stance, to be repeated.

Anastasiades, who was speaking during a ceremony, on the occasion of the 60th anniversary of Cyprus` anti-colonial struggle of 1955-59, noted that the Cyprus problem remains the primary national challenge.

He said that the intransigence of the Turkish side has not allowed for a fruitful dialogue on the Cyprus problem to take place during the last two years. Referring to his decision to suspend his participation in the UN-led Cyprus talks, he noted that its was inconceivable for him to continue this dialogue under the threat of Turkish military weapons, war ships or army.

He noted that the decision for dialogue and a peaceful settlement of the Cyprus problem has been something indispensable, calling for similar efforts by all those who can exert pressure on Turkey as well.