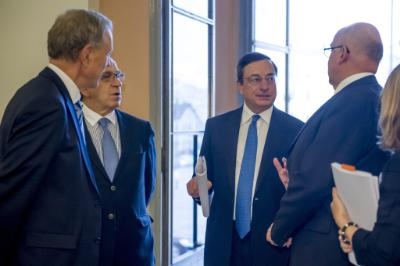 The Council of the European Central Bank is meeting Thursday in Nicosia and is set to reveal details of plans to buy €1.1tn-worth of eurozone assets as part of its landmark quantitative easing programme. Greece is also likely to be a priority issue on the agenda of the meeting.

The ECB’s governing council has traveled to Cyprus for one of its twice-yearly meetings away from its Frankfurt base. A press conference will follow the meeting.

Yesterday ECB President Mario Draghi met with Cyprus President Nicos Anastasiades. Speaking at a formal dinner hosted by President Anastasiades, Draghi said that Cyprus is on track to exit its economic adjustment programme sooner than 2016, adding however that there is no room for complacency.

He praised Cyprus` efforts to consolidate public finances and its banking sector that came to the brink of collapse in 2013, prompting the government to conclude with the Troika (EC, ECB and IMF) a €10 billion bailout.

Addressing the dinner President Nicos Anastasiades told EU Central Bank Governors that eurozone economies are at a turning point for their future and it is imperative to find ways to reestablish their growth potential. He outlined the difficulties the Cypriot economy has faced, the efforts his government has made in the past two years as well as the results yielded so far.

Yesterday, thousands of protesters, participated in a mass anti–austerity rally outside the Filoxenia conference centre in Nicosia, where the ECB council meeting will take place today.