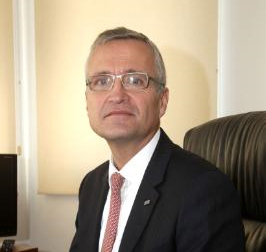 The European Central Bank and the Single Supervisory Mechanism have approved the appointment of Bert Pijls as the Chief Executive Officer of Hellenic Bank.

Pijls, who was appointed by Hellenic Bank’s Board of Directors for the CEO`s position on 7th November 2014, has been granted the supervisory authorities’ approval and as of today he officially assumes his duties. He is the first bank Chief Executive Officer to receive such verification and approval of the newly established SSM.

A Dutch national, Pijls has over 20 years banking experience at positions in the financial services sector of Citigroup and American Express in England, USA, Germany, the Czech Republic and Belgium.

He has served as Managing Director at Citigroup EMEA in London, deputising to the CEO with responsibility for re-engineering operations to improve expense-to-revenue ratios. Earlier roles at Citigroup include CEO at Egg and Managing Director of Consumer Banking in the UK, as well as Country Manager for Consumer and SME Banking in the Czech Republic.