Dejanovic says he may lose two fingers, but is glad he flew the Macedonian flag on Annapurna 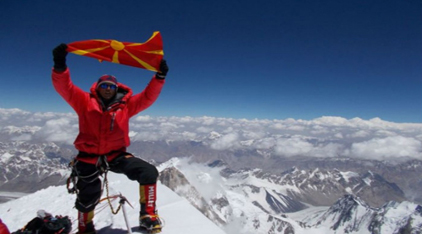 Skopje, 3 April 2015 (MIA) – Macedonian Zdravko Dejanovic, who succeeded to conquer the Himalayan Annapurna peak, says he will likely lose two fingers from frostbite, but is happy because he managed to plant the Macedonian flag at one of the tallest and most dangerous peaks in the world.

“Annapurna is known as one of the deadliest mountains, with only 164 successful ascents. I was the least experienced from all in my expedition, having climbed only two peaks over 8.000 meters – Mount Everest and K2. The climb itself is extremely dangerous, much harder than I expected. Usually these climbs are performed in April or May, but to avoid the danger of avalanches, we chose March. We reached the summit on March 24th, under unbeliveable conditions, 15 hours later than planned. With temperatures at minus 35 degrees Centigrade, our motor skills were badly affected. Only two of us were able to take our cameras out and film our success, and I managed to take the Macedonian flag out. Frostbite will likely cause me to lose two of my fingers, but I’m not complaining”, Dejanovic said at a press conference in the Agency for youth and sports on Friday.

Dejanovic added that trouble continued to follow the team on the way back, toward their base camp at 6.800 meters. Afraid they will lose their direction, the expedition decided to spend the night on the open, at 7.400 meters.

“Oxygen was very low, both our brains and muscles were badly affected. We spent the entire night tied to each other, standing up, and jumping in place to prevent freezing. If you close your eyes for one second, you can fall asleep, and it can be the death of you. Only next morning we were able to continue to our base camp”, Dejanovic added.

Macedonian Mountain climbing federation President Jovica Ugrinovski said the federation did its part to help Dejanovic on his triple expedition, and so did the Agency for youth and sport. He will be awarded with 6.500 EUR for his accomplishment. Dejanovic said he plans to continue with his mountain climbing exploits, but right now needs some time to rest and recover from Annapurna.