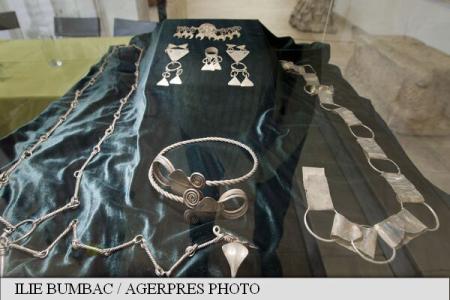 Romania’s National History Museum (MNIR) has enriched its collections with 18 pieces of Dacian silver – fibulas, necklaces, rings, bracelets, pendants and phaleras – of an exceptional value given their rareness, the museum’s director Ernest Oberlander-Tarnoveanu announced in a press conference on Tuesday.

The exhibits are on display at the MNIR headquarters until Sunday, after which they’ll be examined by the investigation authorities.

“A week ago sharp, on Tuesday, July 21 we have brought back to Romania, from Germany, a treasure fragment containing 18 Dacian silver jewels. The pieces have been sighted in trade this spring, and judicial procedures were started to block their sale and to create the conditions for their recovery and repatriation,” said Oberlander-Tarnoveanu, adding that the necessary money, 43,000 lei (nearly 10,000 euros) was provided by the Culture Ministry.

The treasure contains whole, functional parts, exceptional due to their rareness and excellent preservation, dated in the first century BC, the MNIR manager specified.

“All I can tell, as one who has seen almost everything in Dacian treasures kept in public and private collections in many European countries and other world areas, it’s this is the most beautiful Dacian treasure. The finery is quite particularly beautiful. The treasure includes several fibulas with nodules, which is typically Dacian, and bracelets decorated with stylized snake heads. Beside those, there are several axe-shaped pendants, an element that brings information on the Dacians’ religion and some of them are decorated with religious symbols, such as the swastika, a piece that also says something about the spiritual universe of the Dacians from the period before the Roman conquest,” Ernest Oberlander-Tarnoveanu explained. More…