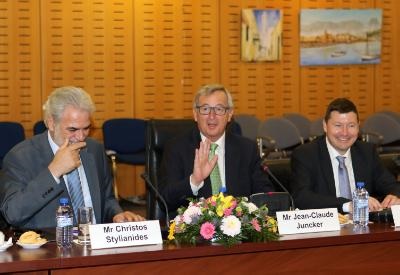 European Commission President Jean Claude Juncker has pledged to return to Cyprus after reunification and urged everyone to forget the past and support the leaders.

Addressing a special session of the House of Representatives, President Juncker said the two leaders are on the right track as he has ascertained from his meetings on Thursday with President Nicos Anastasiades and Turkish Cypriot leader Mustafa Akinci.

He said he believes the two leaders can solve the Cyprus problem, although it will not be easy. It will be very difficult and compromises and concessions will be needed to reach a settlement to allow Cyprus to reach its full potential in the EU, he noted.

He also said that Cyprus will not walk alone after reunification, adding that the EU will be at Cyprus` side. The benefits of a solution, he said, will be huge.

The Commission President said that Cyprus has been going through an economic adjustment programme and paid tribute to efforts and the commitment of the government to implement the programme, noting that the results are visible.