Cyprus to provide expertise to Iran on missing persons’ issues 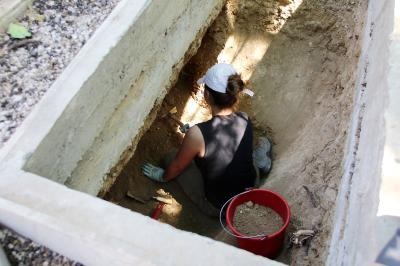 A delegation from Iran consisting of officials from the Defense and Foreign Ministries, the Genetics Institute in Tehran and the Red Cross paid a three-day visit to Cyprus to be informed about the procedures followed by the Committee on Missing Persons (CMP).

The delegation was in Cyprus from Monday to Wednesday and had contacts with the CMP seeking assistance since Iran seems to be facing difficulties in the issue of exhumation and identification of missing persons.

It is estimated that approximately 45,000 people have gone missing during the various conflicts in the country as well as during the Iraqi wars. Around six thousand people have been identified and their remains were handed over to their relatives.

The representative of the Greek Cypriot side to the CMP Nestoras Nestoros had told CNA that the visit of the Iranian delegation was arranged through the Red Cross.

He said that during their stay, from Monday to Wednesday, the Iranians conducted site visits at areas of exhumations, at the anthropological laboratory and they had a very detailed briefing on the procedures followed by the CMP.

Nestoros said that the delegation indicated that if the Iranians want some other assistance and expertise, they can have it.

“We have trained scientific personnel from Iraq. So far we have trained 18 people“, he said. Asked whether scientists from Cyprus will be going to Iran, Nestoros said this will depend, adding that the CMP is willing to offer assistance in any way it can.

“We have the expertise, we specialize in very difficult cases, ie cases where only a limited number of remains are found, we follow all the protocols and have the tools to help”, he added.

As regards the progress of work underway in Cyprus, Nestoros said the exhumation process is completed at ELDYK (Greek contingent) camp. “We have identified complete skeletons, some were disturbed however, but the skeletons are complete”, he explained. The identification process may take up to two years.

Exhumation work is in progress in the eastern part of the occupied town of Lapithos and so far scientists have not been able to identify any remains.

The process at the cemetery of Saints Constantinos and Eleni in Nicosia is also underway and a slightly bigger number of remains was located than the what was anticipated.

The work at Makedonitissa Tomb is set to begin in mid August. The Cabinet has decided to carry out excavations in order to remove a Cross Monument that was set up there. There are reports that this is the location where Noratlas aircraft was shot down by friendly fire during the 1974 Turkish invasion in order to locate the remains of missing persons.

The Tomb at Makedonitissa is a memorial and a cemetery in Nicosia where officers and soldiers who were killed during the invasion are buried.

Cyprus has been divided since 1974, when Turkish troops invaded and occupied its northern third. Since then, the fate of hundreds of people remains unknown.

A Committee on Missing Persons has been established, upon agreement between the leaders of the two communities, with the scope of exhuming, identifying and returning the remains of missing persons to their relatives.