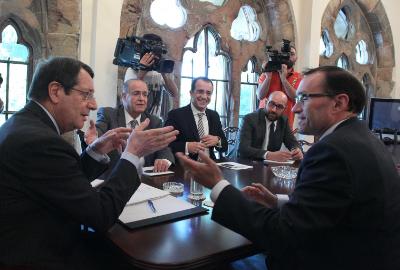 The Cyprus talks have now reached a crucial stage, Government Spokesman Nikos Christodoulides has said, underlining that the Greek Cypriot side remains committed to the need for hard work and hard negotiations.

President Anastasiades and the United Nations Special Adviser on Cyprus, Espen Barth Eide reviewed on Tuesday the current situation of the negotiations and the future scheduling, taking into account the leaders` decision to intensify talks in November, Christodoulides told the press after the meeting.

“We are at a tipping point, there are difficulties and disagreements,” he noted, sending the message that “our side remains serious and committed to the need for hard word and negotiations and we shall see how the process will evolve”.

Replying to a question the Spokesman said that so far only the UNSG`s report referred to the possibility of a multilateral conference in Spring and noted that “to hold such a conference first we need to solve a lot of issues on which there is disagreement”. Therefore, he said, “our attention is focused on resolving disagreements”.

The Spokesman refuted reports in the Turkish Cypriot press that the two sides reached a deal over the population of a reunified Cyprus, adding that the Greek Cypriot side aims for a demographic ratio that will reflect the state of play of 1960.

He also said that the two negotiators are now focusing on property criteria.

“This is a very sensitive issue, there are disagreements and the aim is to agree on such criteria that will ensure the implementation of what has been agreed between the two leaders, that is the individual`s right to property”.

Cyprus has been divided since 1974 when Turkey invaded and occupied its northern third. UN backed talks resumed in May aiming to reunite the island under a federal roof.