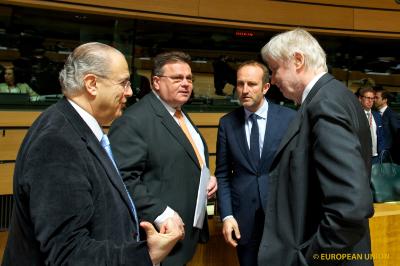 Cyprus supports the efforts of the United Nations and the Special Representative of the UNSG in Libya for the achievement of a political agreement and the formation of a Government of National Unity in the country, Foreign Minister Ioannis Kasoulides has said.

FM participated in the EU Foreign Affairs Council in Luxembourg on Monday, which focused, inter alia, on the developments in Libya and Yemen, the recent developments regarding the E3/EU+3 negotiations with Iran for its nuclear programme, as well as the EU relations with the countries of the Latin America and the Caribbean.

According to an announcement issued in Nicosia, Kasoulides pointed out that today’s meeting shows that the European Union is fully aware of the immediate need to support Libya, so that its citizens can live in conditions of safety and stability, without being forced to follow the tragic, as proven in the last days, path of illegal migration.

“I believe that all interested parties in Libya, negotiating at the moment for the future of their country, share the sense of the urgency, which is evident in today’s discussion”, Kasoulides said.

During the afternoon deliberations, the discussion will focus on the issue of migration, in light of the recent tragic incidents in the Mediterranean.