Cyprus-Russia will cooperate regardless concerns others may have, says President 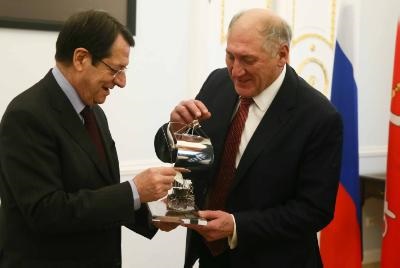 President Nicos Anastasiades has said that Cyprus and Russia wish to enhance their ties and cooperate even closer in an attempt to create conditions for peace and stability in many areas, adding that this cooperation will continue irrespective of reactions and concerns others may have.

The Vice Governor said that relations between the two countries are based on mutual understanding, adding that Cyprus remains a credible partner.

He pointed out that the meeting Cyprus President had with President Vladimir Putin in Moscow and the agreements signed show that both countries share the same objective to further enhance their relations.

Govorunov said that Cyprus is a popular tourist destination among Russians, adding that in 2014 tourists flying from St. Petersburg to various destinations recorded a decrease, whereas the number of tourists to Cyprus increased.

He described relations between Cyprus and St. Petersburg as traditional, expressing his gratitude for the stance Cyprus had in the EU on the issue of sanctions against Russia.

In his statements the Vice Governor also referred to various cultural events and conferences that take place in his city with the participation of Cypriots as well as to events organized by the General Consulate of Cyprus in St. Petersburg.

Govorunov talked about the close ties his city shares with the coastal city of Limassol in Cyprus, adding that the two cities have a close cooperation in many areas, including higher education (ie Cyprus University of Technology in Limassol). He said that soon an MoU will be signed between the Mayor of Limassol and the local government of St. Petersburg.

The Vice Governor conveyed his congratulations to Paphos, a city on the southwest of Cyprus, which will be Europe`s cultural city for 2017.

President Anastasiades in his statements expressed gratitude for the warm welcome he and his entourage enjoyed, adding that during the contacts he had with President Putin he thanked him for Russia`s long standing support to Cyprus and to Hellenism in general.

He referred to the close ties St. Petersburg has with his home town Limassol, adding that the same goes for the close relations between Cyprus and Russia, adding that this cooperation serves everybody’s interests.

President Anastasiades commented on the fact that tourist arrivals from St. Petersburg have increased in the past few years and that in 2014 more than 145,000 people visited Cyprus.

He said that at a time of financial crisis the presence of Russian tourists on the island offers support to the economy and contributes to economic recovery.

In his statements, the President also referred to the cooperation between the Universities of both countries, adding that the high standard of the Russian universities is to the interest of Cyprus which can learn a lot and can have a cooperation in many areas.

On the cultural cooperation, the President referred to the event titled “Cyprus days“ organized in St. Petersburg by the General Consul Demetris Demetriou, adding that this is one of the most successful events that take place in the city. He added that beginning of March the Mayor of Limassol will be signing a Memorandum of Cooperation with the Government of St. Petersburg.

The Cyprus President expressed joy for the fact that the city of St. Petersburg is planning to participated in the events at Paphos for the Cultural City of 2017, saying that Russia`s rich culture is very much admired in Cyprus.

He said that Cyprus businessmen, technocrats and economic experts will be encouraged to attend a forum that will be taking place in the city. The President thanked the local government for the efforts that it is taking to stop some businessmen and land developers from trying to sell property that belongs to Greek Cypriots and it is now under Turkish occupation in the northern third of the island.

He invited the local government of St. Petersburg to visit Cyprus, describing the island as a paradise despite the fact that mistakes made from either the Greek Cypriots or the Turkish Cypriots have turned this paradise to hell for a period of time.

Once again the Cyprus President said that he is going to depart Russia with the deepest and most positive feelings, describing his visit as very successful.

He said that the symbolism of his visit and the response of the Russian government sent a number of messages to all those who may have concerns and oppose relations between the two countries.