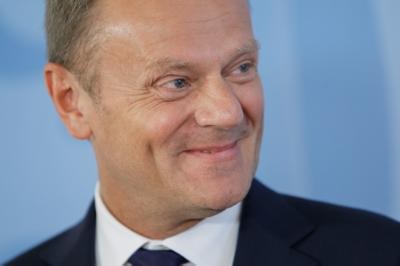 The Cyprus problem, the economy and the island`s role in the region are included in the agenda of talks European Council President Donald Tusk is expected to have with Cyprus President Nicos Anastasiades during his visit here.

Tusk, who arrives in the island on Thursday evening, will be welcomed by Foreign Minister Ioannis Kasoulides at Larnaca International Airport.

On Friday, the EU top official, will be received by President Anastasiades at the Presidential Palace where they will have a tête-à-tête meeting.

Official talks between the two delegations will follow, while later the Cypriot President is expected to host a lunch in Tusk`s honour.

He departs from Cyprus on Friday afternoon.

In statements recently on the EU official`s visit Government Spokesman Nicos Christodoulides had said that the agenda will include an update of where things stand in the Cyprus reunification talks, the economy and the role Cyprus can play in the region, in view of an initiative President Anastasiades has taken to propose that the Israeli Prime Minister Benjamin Netanyahu and Palestinian President Mahmoud Abbas are invited to separately address the European Council.

Tusk arrives in Cyprus having visited Palestine, Israel and Turkey.

Cyprus was divided in 1974 when Turkey invaded and occupied its northern third. UN backed talks resumed between President Anastasiades and Turkish Cypriot leader Mustafa Akinci aiming to reunite the island under a federal roof.