Cyprus peace talks on a summer recess ahead of September meetings 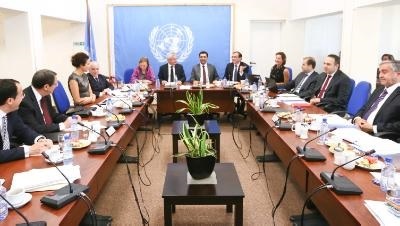 The negotiators of the Greek Cypriot and the Turkish Cypriot sides, Andreas Mavroyiannis and Ozdil Nami, are wrapping up their meetings on Friday before resuming their discussions on August 25 to prepare the next meeting of the two community leaders on September 1st.

During Friday`s meeting, in the presence of the UN Secretary General’s Special Advisor on the Cyprus problem, Espen Barth Eide, the two are expected to review the work achieved so far.

The UN-led talks will resume the last week in August on a daily basis to prepare the ground for the September meeting between Cyprus President Nicos Anastasiades and Turkish Cypriot leader Mustafa Akinci.

Eide told reporters during the last meeting of the leaders on 27 July that Anastasiades and Akinci continued to make progress towards their shared vision of a united, federal Cyprus. They had focused on issues of property and criteria on territory and “the leaders agreed that the individual’s right to property is respected”. A second meeting is scheduled for 14th September.

In the past week, Eide, together with the Special Representative of the UN Secretary General in Cyprus Lisa Buttenheim and a delegation of UN officials visited HQ Camp San Martin in Sector 1,in Skouriotissa, as well as the Turkish occupied town of Famagusta, where he met with the Famagusta Initiative and toured the old city within the walls. Eide and his entourage also paid a visit to Pyla village, where they had a round table discussion with the two Mukhtars. They also had a briefing at the UNPOL station based there. During a tour of the village, he had the opportunity to meet with local residents.

Yesterday he visited the Maronite villages of Kormakiti and Karpasia in the Turkish occupied north of Cyprus where met with Greek Cypriot enclaved residents.

The Turkish Cypriot press quoted Eide as saying that his visits to various parts of the island provide him with the opportunity to hear the views of ordinary people which are just as important as the views of politicians. He said he will continue these meetings throughout Cyprus.

Cyprus has been divided since 1974 when Turkey invaded and occupied its northern third. The leaders of the two communities, President Anastasiades and Turkish Cypriot leader Akinci have been engaged in UN-backed talks since mid May with the aim to reunite the island under a federal roof.
CNA/EC/MM/2014
ENDS, CYPRUS NEWS AGENCY